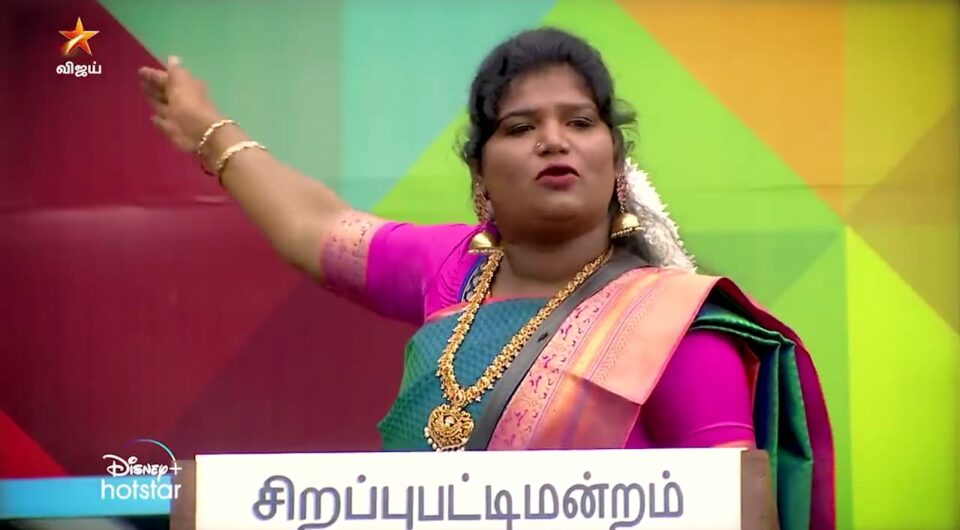 As the luxury task splits the housemates in two teams, it split them emotionally too. Suresh unintentionally hit Sanam yesterday in the spirit of the game, Sanam loses her temper for a while. After a lot of commotion, Suresh apologized and felt bad for his actions. In the event of it, Bala too had hard feelings towards Suresh’s actions which in turn affects Suresh as he is one of the closest confidant he had in the house. There is a vivid friction going on between the two.

Today, The task is for the housemates to split into 2 teams and debate whether the Bigg Boss house is a happy home or a competitive home. Bala talks on the topic that the Bigg Boss house is a competitive house. Anitha talks for the same topic and says that it’s the game spirit that hold upper hand in the house and not love. To counter it, Samyuktha and Rio say that above the spirit of the game, there lies love beneath the competitiveness. And to make their case strong, Nisha gives a finishing speech that’s smashing. Her expertise to have done many debates in her profession comes in handy. Nisha shines. Archana is the judge of this event and hand it to Nisha’s team proudly the win. During the debate, they mentioned the housemates are not even dining together and where one could look for love in that.

After the debate, as the captain of the house, Rio asks everyone to dine together when Shivani, Ramya were having their meals in the kitchen table itself. Rio tries erase the thought of groupism in the house and he accuses Ramya to contribute to such remarks. For which, Ramya says she doesn’t try to be in a separate group at all and she says she is indeed mingling with everyone. They decide to dine together hereafter.

Another daily task is the housemates have to sit in circle in chairs and pass the parcel that’s given to them. Velmurugan sings songs and when he stops his song and who has the parcel at the time, loses the game. They have to someone to do something funny. Sanam goes out and asks Bala to tell nice things about her as it’s established he doesn’t like her much. He does. And the game goes on. Ramya is really fun to keep her around and a good company. She harmlessly makes things funny and effortlessly sweet. She asks Aari to wear Nisha’s night dress and with towel to dance for Mala Mala song. The game becomes between Som, Suresh and Samyuktha. When it is between Som and Suresh to decide who lost the game, Aari says it has to Suresh who has to go out as the same thing happened between Aari and Samyuktha. Aari easily gets tensed and turn a fun game into a serious one.

Som goes out and Suresh is asked to do some theatre expressions. Anitha and Archana help him wear Kanchana make up and he beautifully and stunningly enacts Raghava Lawrence’s Kanchana’s character. The day is fun for the housemates and for us too. Last day for the week is here. Anitha, Suresh, Aari, Bala and Aajeedh are lined up for eviction nomination. As Suresh has gathered a new wave of support after his unintentional clash with Sanam, It is highly unlikely he would get evicted. Aajeedh is still finding his voice but it is unsure to say if he has gathered any support at all. He might need to use his eviction pass this week. Let’s wait and watch.

Parents can serve you as reference but it’s your talent that takes them forward: Khatija Rahman