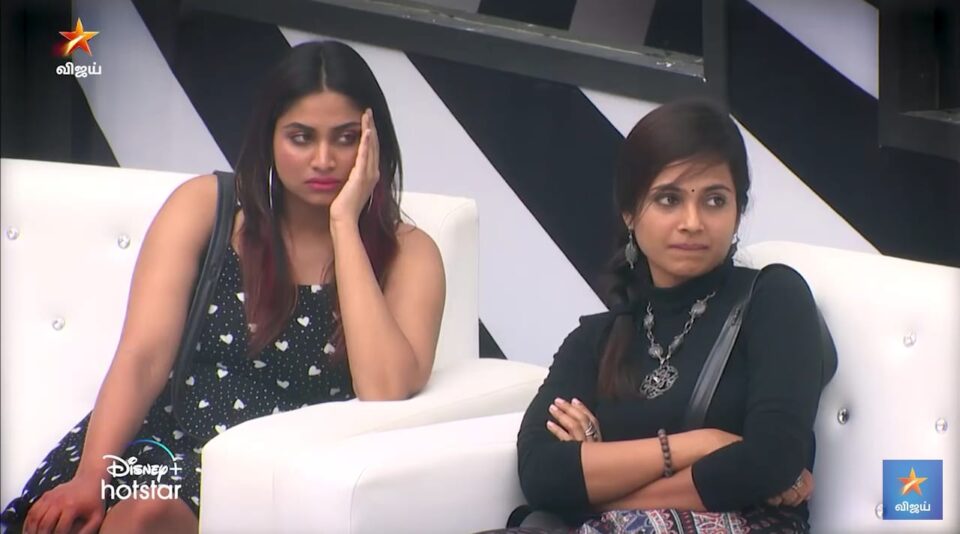 Last day of the week, Bigg Boss season 4 contestants are ready to face evictions in the upcoming weeks. As they finish their breakfast, Suresh and Aajeedh converse about what they think of each other in the eviction process. For which, Aajeedh says he thinks Suresh will leave in this week’s eviction.

Contestants are asked to nominate themselves based on who performed well in the luxury tasks, daily tasks and daily activities and who were boring. Sanam, Bala and Archana are nominated as the best performers and unanimously they vote Sanam as the best performer of the week. Aari and Aajeedh are named as boring performers. There were a lot of names thrown for boring performers like Shivani, Velmurugan and Ramesh. But Aari and Aajeedh got the most votes and went to resting glass door room outside the main door. Ramya gives her two cents to Aajeedh to sing and mingle with everyone in the house and not just with his close friends, so that people and housemates know his true self.

While Aari and Aajeedh are inside the resting room, Anitha and Bala talk to them and give them company. Anitha tells that deserving contestants are going to the eviction nominations just because some of the undeserving contestants are being protected by their friends. Bala and Aari feel that Rio is being protected by his friends and they think it’s unbiased.

Bigg Boss gives them a task to rate each other based on their opinion from 1 to 16. The person who gets the place 1 is considered as the Bigg Boss title winner according to the contestants judgements. This week, Suresh, Bala, Sanam, Aajeedh and Anitha are in the eviction nomination. They unanimously vote Suresh as the person to the 16th place which means they think he would be going out of the game this week. Suresh has been getting online supporters and also thrashers. But the weekend has to answer if he is still going to be in the game. The contestants get confused with choosing people to rate them. So, Samyuktha suggests that they split 16 contestants into top 8 and bottom 8. After that, they will be repositioning each other according to the rank.

Sanam gets the 15th place which means the housemates think she will be going out of the game in the next week. Samyuktha gets the 14th place for which Sanam gives the reason that she hasn’t witnessed Samyuktha’s true nature yet as she is only seeing her jovial personality. Velmurugan gets the next place, 13th for which Ramya gives the reason that Vel is trying hard to be a diplomatic person in the game which is not possible in this kind of game. They feel Vel need to speak his mind about what he truly feels about anyone in the house.

Bala and Archana gets into a clash as he feels that Archana is dominant and treats him with partiality. She backs Rio for his anger but says Bala’s anger is his enemy which he finds contradictory. Archana cares for him and thinks of him as a child but Bala doesn’t want to be defined as a child and it hurts his ego. Ramya gets the 1st place. According to the housemates, Ramya is the Bigg Boss Tamil season 4 title winner.

After the task, Suresh and Samyuktha discuss with Bala that his arrogance shadows his honest, straightforward nature. But Bala doesn’t want to listen to him as he feels they are not on the same page. Bala thinks he is right to have behave the way he does and not realizing that his words hurt people around him. He speaks the truth in a very sharp way but he isn’t harbouring hard feelings about it. He is plain as a person but only seem adamant.

Suresh shares this thought to Vel and others, saying education doesn’t necessarily need to bring up one with kindhearted and in the same way, he defines literacy too. Vel thinks of himself as a person who hasn’t possessed much knowledge from his education and feels a bit intimidated. But Bala comes to Vel and talks to him about he isn’t trying to mock his knowledge and only trying to bridge gap in understanding between the two. They talk about the definition of diplomacy in much more way.
Jithan Ramesh celebrates his birthday with a special cake from Bigg Boss. A special video message from his dear brother, Actor Jiiva and his friends. Aajeedh’s mother too shares this day as her birthday. Team wishes her from the house. He dedicates a song to her. And Vel sings song to celebrate the moment to wish Ramesh. Housemates happily turn in for the night. Let’s see what they have instore for this weekend.