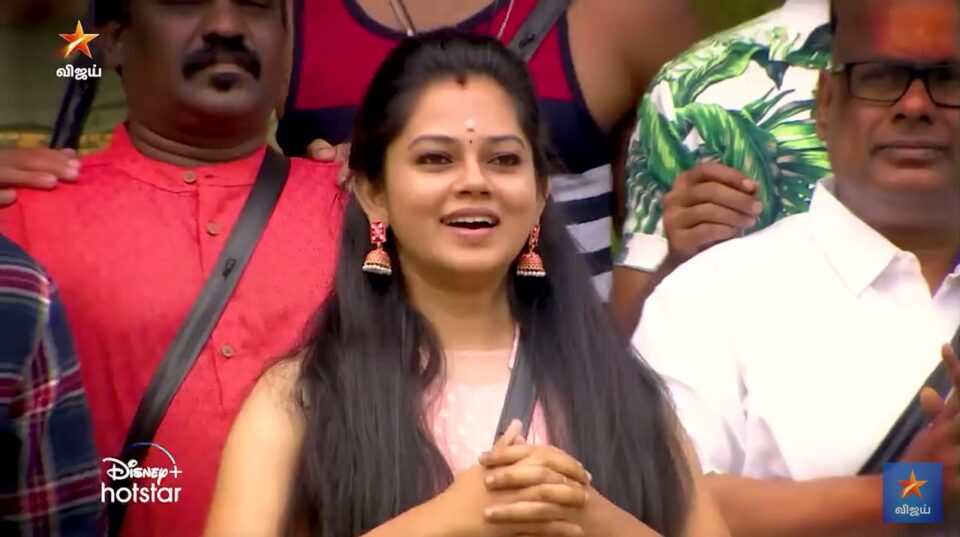 Vijayadasami celebration took over Bigg Boss house too. As usual on Mondays, Contestants nominated each other for the next week’s eviction. Aajeedh, Anitha, Bala, Jithan Ramesh, Nisha, Ramya, Rio, Sanam, Sam, Suresh and Velmurugan are nominated. Contestants burned each other photographs, given by Bigg Boss, on the bonfire to affirm their nominations.

Anitha Sampath hosts the celebration events in the house. They decorate the whole house with lights and flowers. Contestants are split into 2 teams as urban and rural. Suresh, Archana, Nisha, Gaby, Aajeedh, Aari are part of rural team whereas the rest of the are part of urban team. They are asked to showcase each of their celebration styles. Suresh and Archana prepares their festival delicacy sweet Kesari. Suresh calls it chettinad style and tag a particular forward caste name in his game. Sanam’s Urban team prepares Paayasam with organic products. When Suresh’s team is asked play by Bigg Boss as rural team, they choose Chettinad’s style for any unexplained reason. Vijayadasami is not widely celebrated like how they show in this game show. And Using the name “Chettinad” makes the game less generalized than it supposed to be, to the wider audiences.

As Anitha be the judge of both of their cuisines, Anitha says Sanam’s team is better and they win it. Anitha said Suresh’s Kesari is a bit too sweet. Suresh didn’t appeal her judgement though he tried to undermine Sanam’s paayaasam after tasting it. He said it had some sand particles from unfiltered jaggery and probably Anitha thought his Kesari was a bit sweet because she first tasted Sanam’s Paayasam.

Each contestant is given a doll to paint to keep them as part of Dusserah celebration which again didn’t seem a generalized way of celebration for the wider audience to Tamil Nadu. They all have fun with it and have a variety of meals for lunch. During the lunch, Suresh, who appears to be in his game role, as a person from rural area, says some cliched, regressive things at Nisha, like talking about dowry and stuffs and some more patriarchal comments, which wasn’t taken into account as vulgar at all. They all took it as a part of game and it wasn’t something to be encouraged.

The housemates dress up for the evening and plan to have a showdown. They send their personal wishes to their family. They all play seven stones. Anitha hosts the evening events, a competition between rural and urban teams. Aari goes against Ramya in a debate game. Each presents valid points about how they are better. Gaby goes against Shivani in a dance round. They both exhibit stunning dance numbers. And the showdown is a skit between the teams. Archana, Gaby and Samyuktha enacts the Saraswathi Sabatham story, an old mythical tale. As the people who have got the opportunity to assert some progressive thoughts to the mass, they still cling to the myth where 3 women with strong potential of wealth, Wisdom and courage are pit against each other and they place a man, Shivan, to resolve their dispute. They still inculcate a man can solve a problem of 3 women who are shown to not able to solve it on their own together. But other than this point, their performance was genius. Sanam’s team did a fun skit to keep the events light.

Anitha insists an important point during her hosting and I’m glad she did. During the pooja events, while they are placing the painted dolls in the shelfs given to them, Suresh asked women of the house to put handful of rice in a pot and start the pooja. It’s admiring to see the housemates celebrate a hindu religion festival together. But Suresh did, out of an inbuilt reflex during pooja, say that married women to come forward to begin the pooja. Anitha wanted to point out that there still this kind of practice has been followed in many places and she wanted to take the stage to overcome this myth of having a widow or divorced or unmarried to begin an “auspicious” event in any religion. Suresh took it very hard to his heart as he saw that as an personal attack by Anitha and tries to undermine her profession to distract the audience from his inbuilt reflexes about such ideologies.
Suresh is either angry and disheartened because the light is shed on his ideologies on a national TV or angry for taking his intention out of context. He refuses to talk it out and make peace with it. He is focused only on his strategy to undermine Anitha. Rio, Aari, Nisha and Archana stand with Suresh on the issue. Suresh couldn’t keep his cool until he gets his disappointment off his chest. While Ramya, Bala, Sanam, Samyuktha and Shivani stand with Anitha’s point as they don’t find it wrong, as they don’t want such regressive thoughts to linger on people’s minds.

Anitha says she didn’t mean personally anything against him but Suresh refuses to have any conversation with her. He thinks he might not keep his temper in check in the heat of the moment. Suresh badly wants at least one of them in house to sand with him to tell to Anitha’s face what she did was wrong. We are yet to see the problem gets bigger in the coming days.