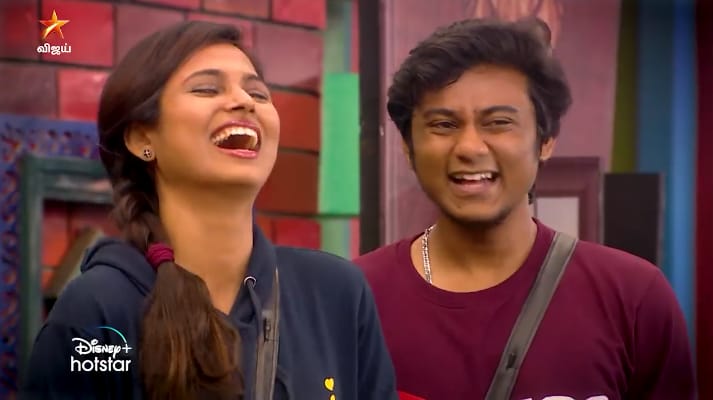 Luxury budget task of the week involves the contestants to play the whole day of every hour. They are given timeline that’s split by hours. They are split into 4 teams, 3 in each, count the every second of every hour, like a human form of clock. Among them Rio, Aari and Gaby calculate the time close to accurate. Sanam, Nisha and Anitha do their best as a runner up. Teams have fun doing all their mundane task like preparing food, collecting water for their usage and their luxury tasks while a constant trio keeps their human clock in check.

In between the task, for an hour, the contestants are asked to talk only in gibberish with each other. Som, Rio, Gaby have fun doing it along with others. In the evening, they are given another task to talk like actors from the time of monochrome (Black & White) films. Anitha smashes the task with her uncanny M.R. Radha impression. Rio and Nisha do their impressions comically and impressively. Archana and Nisha try to enact the street fight that tend to happen during water supply in the cities. Though this shows the plight of the people who have to fight for their basic needs like water supply. They may thought this is a harmless fun task but it shows how much the plight of the people is worse when it comes to their fundamental needs.

Gaby tells Rio and other that Suchitra’s acted a bit strange when working with Aajeedh which seemed a bit rude. And others share her views about why Suchithra does something and for what that leave them confused. Shivani asks Bala if he hasn’t cleaned the toilets yet when he replied that he is prepping and knows what he is doing, which sorta hurt Shivani and she stays silent. Bala, notices this, comes to dance a bit with her in order to console her and again leave to her thoughts like he was doing her a favour which again sorta hurt Shivani. Rio wishes her wife a heartfelt birthday message to assert his love for his family.