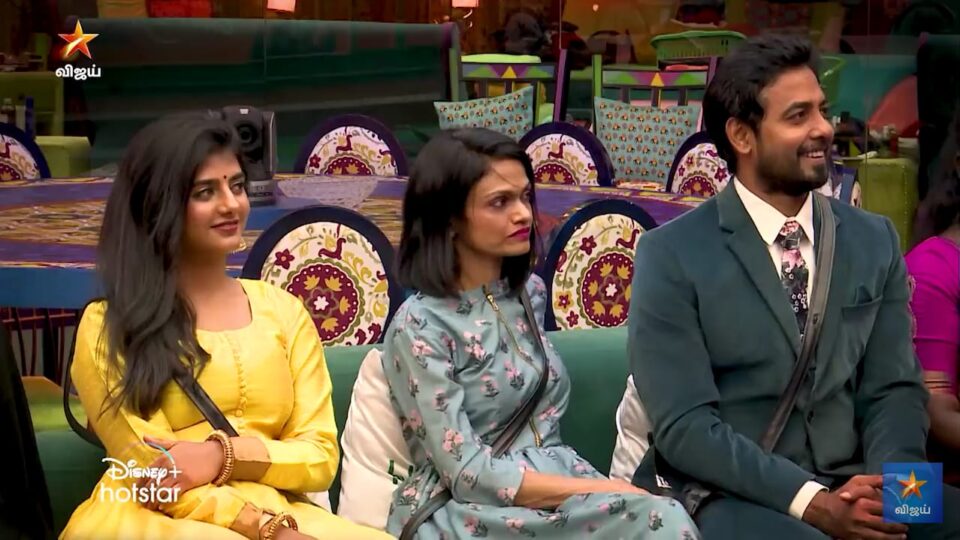 Kamal meets the contestants on 50th day of this house which still got 16 participants to go on. He asks the contestants to share their contribution to the house in this 50 days in one minute each and gives the responsibility to time them to Bala as a harmless dig on his way of measuring time at his own rushed pace during the luxury task. He sincerely does it. Anitha and Suchithra are mentally prepared to face their eviction. Everyone shares their personal contribution to the chores, to the plants, to the housemates as good partners. Som couldn’t bring him up to compile his contribution due to the pressure to do them in 1 minute on national TV. His pressure reminds me of his stammering days, which he didn’t do today, he overcame it. It is itself his own success. Som finds it as an emotional moment to silently observe his path.

Kamal addresses the quarrels and the reconciliations between Suchi-Bala. They both say that it’s their way of travelling together. Kamal says Bala is saved. Aajeedh’s captaincy is discussed. Aajeedh is praised by some for his quiet handling of the affairs, while some say he was immature and confused for most parts.

Kamal talks about eviction and asks who the housemates want to save among Samyuktha-Anitha-Suchithra. Only Sanam says Anitha’s name. Most of them vote for Samyuktha. Only Gaby mentioned Suchi’s name as she and Aari share the view that Suchi entered the game late and she needs some more time to play it clearly. Suchithra gets evicted. While most the housemates assuage Samyuktha and comfort her for escaping the eviction. Only few Sanam, Anitha, Bala, Aari are with Suchi to send her off. Others join the party late to say goodbye. Suchi rushed out as he couldn’t find the heart to stay at her favorite show which didn’t love her back.

Suchi meets Kamal outside the house and gives an honest criticism about the contestants. She says she was a fangirl to all the contestants when she went inside. She realized there are many faces those are there for camera and some for off-camera. She finds Rio-Nisha-Archana-Ramesh as fake personalities. She is disappointed with Samyuktha-Archana. She praised Sanam for her courage to put her front despite all the inside jokes, humiliation thrown at her. She respects Anitha, Aari, Bala, Som for their honest game. She finds Ramya as clever, bubbly and silent killer of this mind game. Ramya is cool and untouched by any stirrings.
Suchi says she only got negative vibes from Shivani as the latter didn’t like Suchi-Bala to spend time with. As Suchi found her a bit antagonistic, She couldn’t find way to interact with Shivani to know about her. Suchi, who could have been a talented player, leaves the house with heavy heart. She wished the contestants all the best and hopes Bala wins the title. She walks out in the hope she bounces back with her singing career which is the only thing that makes her happy.
Stay with us for more updates!

Kavin and Losliya to play the lead in Raja Rani 2?