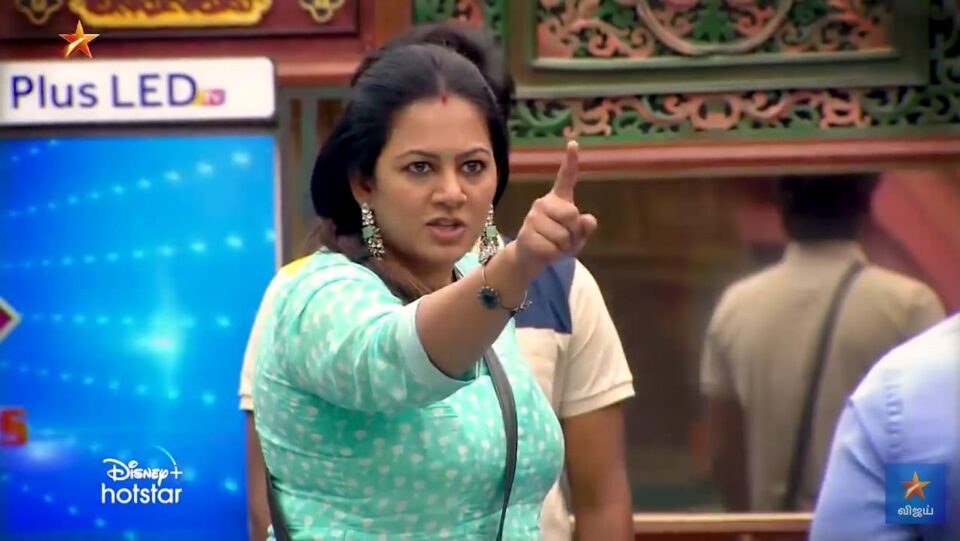 Anitha gets the nomination topple card yesterday and replaces her place with Samyuktha for this week’s eviction. That topple card was rightfully won by Nisha which she gave up to Anitha over a raging argument to prove her worth to the audience without a fallback. Som, Ramesh, Rio and Archana who backed Nisha are disappointed at her for giving up a chance like that. Archana and Rio comforts her not to feel bad about the turn of events and she would win by the voting method itself. Nisha is hurt the way Anitha played which only seems fair to Anitha as wants to state her place in the game.

Anitha tries to rekindle a conversation to the hurt Nisha but she is dejected for trying. Anitha even tries to give back the topple but the decision is already made. Next day begins and the task of the week begins too. Bigg Boss Call Center is the game. Contestants are split into 2 groups as Customers and Representatives. Bala, Samyuktha, Aajeedh, Shivani, Gaby, Anitha are today’s representatives who answer the customer’s call one on one on the issues going on in the house. Customer’s objective is to make the representative tense and disconnect the call. If that’s not achieved, the customer is nominated for next week’s eviction.

Archana-Bala have the call. Archana asks Bala direct questions about why he thinks her love is fake, why he accuses her of playing with Som, Rio, Gaby in the front. Bala says he feels Archana is part of a gang in the house which includes Rio, Som, Nisha, Ramesh. Bala says Som is nominated for best performers because she cares for him and decides only on that basis which Archana denies completely as she believes Som is a dedicated performer and deserves to be named for the same. Bala also says he doesn’t believe anyone’s love in the house even Shivani’s with whom he spends his most of his time with. Archana asks Bala to show someone’s name he has tattooed on his arm to prove that Bala does know what loving someone means. This makes Bala to hate Archana even more because she intrudes in his personal affairs. Both of them talked over an hour and Archana isn’t able to irritate Bala enough to make him disconnect the call. Archana is nominated for the next week’s eviction.

Samyuktha-Sanam have the next call. Sanam asks her how Samyuktha could call her derogatory comments in the arguments without anything substantial to submit. Sanam questioned Samyuktha’s honesty and morality when she chose her by-passed victory for her captaincy but Samyuktha just chills and says people who are jealous of her being the captain they are the way they are because how they are brought up. Sanam didn’t get any clarity for her questions and didn’t make Samyuktha to disconnect the call too. Sanam is also nominated for next week’s eviction.
Bala-Gaby argue for why Bala said Archana is using Gaby for her advantage. Gaby is furious and says she performed her best in the all the task because she is deserved and not because anyone’s support. Bala discourages Gaby and says she is arguing because she wants her limelight. Bala’s unconcerned act irritates the housemates as he thinks none of them is deserved to play the game. By giving importance to what he thinks, contestants inadvertently make Bala an important noise. Gaby brings up how he criticized Aajeedh personally for his captaincy and when Kamal asked last Sunday Bala praised Aajeedh just to get back at the previous captains Rio, Archana, Aari which showed his double colour. Bala doesn’t wait to answer and just walks away for any conversation directed at him. If anyone asked beyond that, he accuses that they are all ganging up to counter.

Sanam-Samyuktha have a heated talk as well after the task which Aari also joins because Samyuktha mentioned contestants think the way they think because that’s how they are brought up. Samyutha is hurt since yesterday as Aari compared Aajeedh and Samyuktha and said Samyuktha, who is a mother, doesn’t have the maturity which 18 years old Aajeedh has. Samyuktha felt her motherhood is questioned. She brought up in the argument with Aari which he denies that he didn’t intend that way and apologises for the same. Bala-Samyuktha have a talk later in which Bala says he doesn’t think what Samyuktha said is not rude but also he tips her not to be harsh that way but inside the house he only stood by Samyuktha against Sanam and Aari.