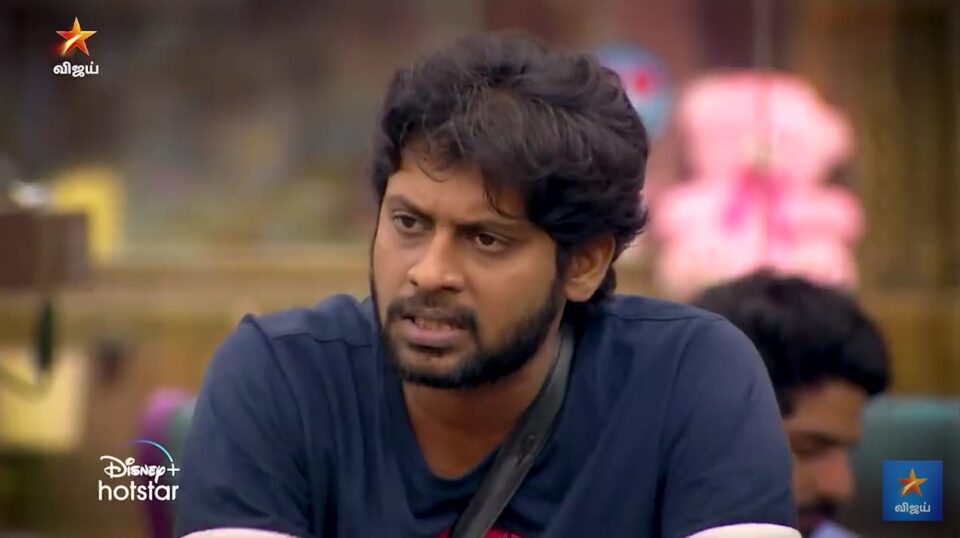 Rio calls Aajeedh as part of Bigg Boss Call Center luxury task and asks the questions those he wanted to direct to Bala. Rio wants to make sure that the people who share love inside house doesn’t deviate others’ game like Bala says. And Bala’s bond with Samyuktha affected Som’s game in the captaincy task. And Rio says how is it wrong to look for some love in the house they are made to stay for over 50 days. Aajeedh sings cutely and gives him only his opinions on the issues at the house. Aajeedh wants to save Rio from nomination, so he disconnected the call. Nisha, Som and Archana are happy the way Aajeedh handles the questions and saved Rio too.

Ramya is disappointed at the questions as she also strongly believes Rio and his group favours each other against the game. Sanam-Anitha want to ask Rio why he mentioned them as independent players, who are camera/game conscious and they even began to bond as friends. Sanam-Anitha say everyone in the house is game conscious and not only them. Rio says he only wanted to show them in good light and he realizes that he shouldn’t have taken them as examples.

Ramya brings up the issue of why he would switch Anitha form cooking team and gave a readson that people who doesn’t know cooking can learn and they would serve food on time. Ramya counters that this is illogical and she wasn’t involved in the decision making and just passed on the information. Samyuktha also brings up an issue that Rio mentioned that vessel washing team would be hectic as Anitha is in the Kitchen team. Rio says he didn’t mean that way and didn’t criticize Anitha.

Sanam wants to clarify with Rio that why he would say we would keep it as a secret who would call whom. But he revealed that he would call Aajeedh directly to him. Rio says he want serious about the rule he set and apologise for the same for favoring Aajeedh as he found him worried. He says he would have done the same to anyone wo look worried.
Shivani wants to clarify the same this and Ramesh was sleeping and why he wasn’t woken up by him yet. Rio says he would definitely do whenever he notices and he only notices now. Archana-Nisha tries to make Rio comfort among all the chaos from everyone at the house. Aari advises Rio not to easily lose his temper and he gets it too. Anitha says he wants Rio’s real face to show to the audiences. Rio counters that he is not two-faced. Sanam-Anitha spend itme together how their independent game threats the gang. Bala says to Samyuktha how the gang play together and doesn’t see their own flaws and never nominates them for eviction. Gaby-Shivani and Gaby-Bala involve in discussion about how Gaby is not Aajedh’s or anyone’s loudspeaker and Gaby is not immature and a baby in the house which Bala shared about her with Shivani. Gaby is hurt as Bala is not as close as before after he became close with Shivani.
We are seeing the part of happenings that happened on the day 52 which supposed to show 53rd day. Let’s see tomorrow if the rain has affected the game.