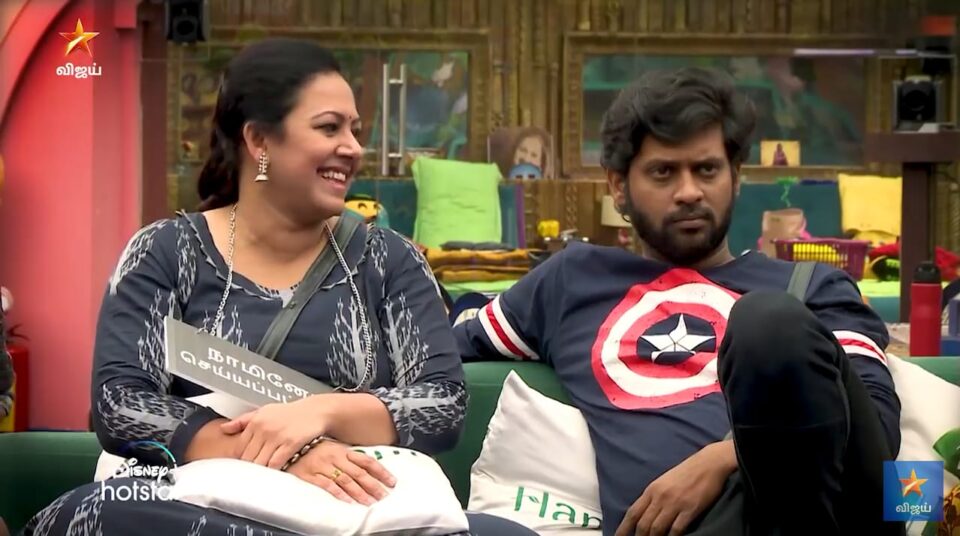 Housemates quarrel about the baggage they hoard on each others to prove there are groups exist in the house. Aari still is hurt by Samyuktha’s word which meant his behavior reflects his bringing up, because he feels the criticism directed to his parents. Aari expresses his disappointment to Rio who is the captain.

Bigg Boss Call Center task happens today too. Gaby-Som have the one on one sweet call. And Som made Gaby to disconnect the call successfully. Som did a smart move which Gaby is aware and still favored him. Bala-Sanam-Anitha discuss how Gaby favored Som in the task and it proves that a group exists.

Aari still carries his baggage and picks his fight with Bala and directs his fight with Sanam too. He tries hard to prove he is honest which doesn’t interest many in the house as he keeps dragging the point. Aari is frustrated as he didn’t get direct answer from Bala.

Ramya-Jithan Ramesh have the next one on one call. Ramya asks Ramesh what reasons he would give to nominate his closest confidantes Rio, Archana, Nisha. Ramesh gives harmless, emotionally affecting reasons only to his friends which only seem dramatic and once again proves the fact that there is a proof exist. Ramesh says he is being perceived as a prince in the house as his needs are taken care of by Archana, Nisha who washes his clothes for him.

Rio and Nisha seem happy to see Ramesh say all the nice things about them and expresses their fulfilling feeling to Ramya. Bala and Shivani seem to have reduced the time they spend together. Bala explains why he was occupied with other things when he wasn’t speaking to Shivani. She is not bothered for the reason and says he need not to give one. They walk away from each other.

Bala and Aari set off on a wrong foot for each other’s body languages provoke them. They couldn’t resolve their issues as they still stand at their points at opposing poles.