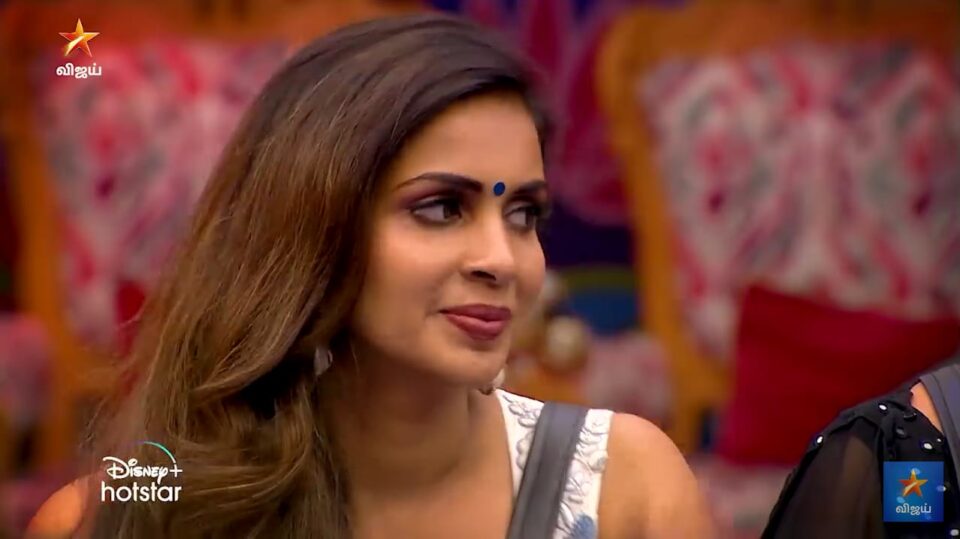 Samyuktha gets evicted from Bigg Boss.

Samyuktha wasn’t facing the eviction but now evicts as Anitha saved herself in the nomination topple card game and replaced her place with Samyuktha. Kamal addresses Samyuktha’s usage of words like dirty to Sanam, how she mocked Aari’s brought up and criticize her to maintain some stage dignity as they seemed like a tongue in cheek expression. Kamal appreciated Som-Gaby’s cute call, lauded Ramya’s call to Ramesh as it brought out his real face. When Ramya said just how Archana has a team of her own with Rio, Som, Nisha, Bala also has a team of his own, Kamal asked which side she is on, Ramya says she is neutral and listens to everybody.

Rio’s captaincy is discussed and rated through stars. Rio mostly got 3 stars as many criticized that he has been captain for the 2nd time but he hasn’t handled it very well. His sarcastic response, emotionally overreacting, sudden lose in temper, made him a poor example of captain this week. Bala-Rio, who are sitting at opposite poles from each other, patch things up today. Archana/Som/Nisha, who are said to be allies of Rio, give only 3 stars out of 5 by pointing out his flaws.

Samyuktha was hurt as Aari compares her maturity level with Aajeedh by saying that being a mother that she doesn’t distinguish an explanation and misunderstood it as agitation. Kamal sides with Aari and clarifies Samyuktha that her motherhood isn’t thrashed. Samyuktha has a valid question that how her being a mother act as a parameter in the game but Kamal keeps trying to convince her by asking her to listen to everyone’s opinion on it. After seeing the snippet, Archana sides with Aari and confirms her motherhood isn’t questioned at all. Archana, who immediately, invites Aari, pointing to her love bed to tell her and her team if there is any support he needs in the house. It sounded annoying and seemed clear that she is joining ally with Aari.

On his book suggestions, Kamal suggests Esther-short stories by Vannanilavan and adds a sweet anecdote how the renowned actor was part of the writings of K.B in Aval Appadithaan. Som and Sanam are saved. Between Nisha, Ramesh and Samyuktha. Nisha is saved. There was a strong emotion shared among Archana, Rio and Nisha, a sigh of relief. Kamal announces that Samyuktha gets evicted. It was heavy for her, for Bala, Aajeedh, Shivani as they truly miss their true friend. Samyuktha transfers her coin credit to Aajeedh, she does a graceful final dance and bids goodbye after taking few good friends for life. She meets Kamal on stage and says how it’s an unexpected turn of event for her to evict. She is proud she has won a lot of hearts inside the house and hopes it’s the same case outside too.

Anitha, who only partially seems responsible for Samyuktha’s eviction, blames herself before anyone blames her for it. Aari says Samyuktha got the result based on her game and Anitha has nothing to do with it. Anitha, who is extremely image conscious, thinks not only for her but for everyone who watches the show and tries to explicitly gauge audiences reactions and thought process. It is extremely annoying and it reveals her extreme need to please everyone, even the audiences. Anitha says she is happy this weekend with Kamal as she feels justice is done through Kamal. Archana, who on the other side, now allies with Aari.