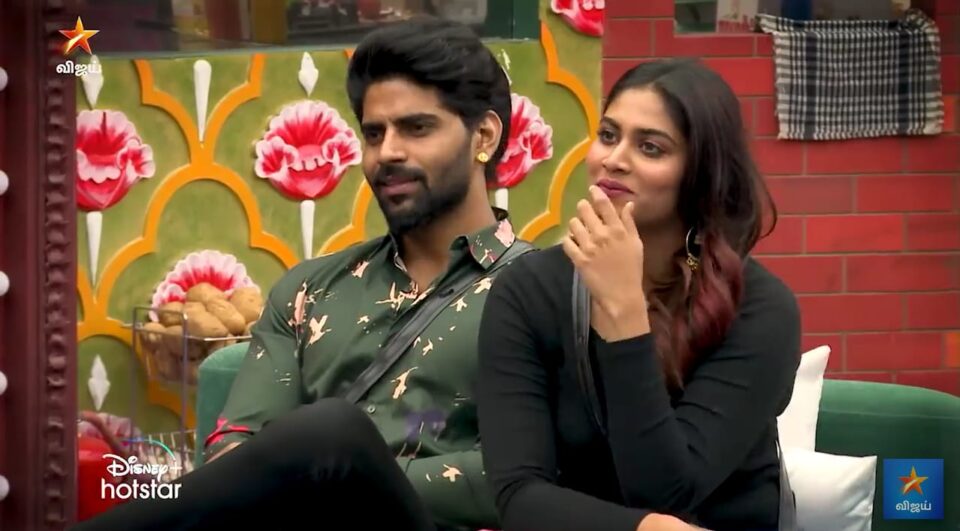 Som is being teased by Ramesh and Gaby for having a crush on Ramya. The days begins with captaincy task for the week. Bala, Ramesh and Ramya compete against each other. They bounce the coloured cubes on a trampoline from below. Each gets assigned their own colours to bounce them and gets negative points for bouncing other contestants’ coloured cubes. Ramya bounces 14 and gets minused 7. Bala bounces 19 and minused 3. Ramesh bounces 19 and minused 2. Bala’s task is monitored by Aari and Bala and Sanam felt that he submitted contrasting points on his observations. Bala is not satisfied with the way his game was monitored and preferred someone who has lesser animosity towards him unlike Aari. Rio meaningfully explains Bala that it was monitored properly and still swayed according to his wish. Bala still feels it’s unfair and unhappy with the things with Aari. He wants to ensure that Aari doesn’t practise what he preaches to the audiences.

Jitha Ramesh is the captain of the house. He invites new ideas and suggests let everyone be their teams’ captain each day and urges everyone to follow the house rules. He appoints Bala as Vice Captain which Bala denies and Ramesh finally gives Nisha that post. Eviction nomination starts and Bala, Rio, who have been nominated consistently every week, are not nominated this week. Shivani, Ramya, Aajeedh, Nisha, Sanam, Anitha, Aari are nominated this week. Shivani is given a reason that she is under Bala’s shadows in the house which bothered her for right reasons. Rio and Bala converse that Rio never says Som, Nisha are best performers only when they perform well doesn’t favor them, turned the same question to Bala. Bala says he never pointed Shivani or Samyuktha best or worst and always been neutral, only did few times when they did well. Rio-Bala makes peace with their bitter start.

Dabur toothpaste sponsors a task of ball and shield game. Bala, Aajeedh, Ramesh, Nisha, Som, Rio win the task as a team and Aari as the judge. Rio is confused as well for why he is not been nominated this week for which Gaby, Som make fun of him for already he has gone through a lot last week. The contestants squeeze lemon and light for the Karthigai Deepam day and ends the day.