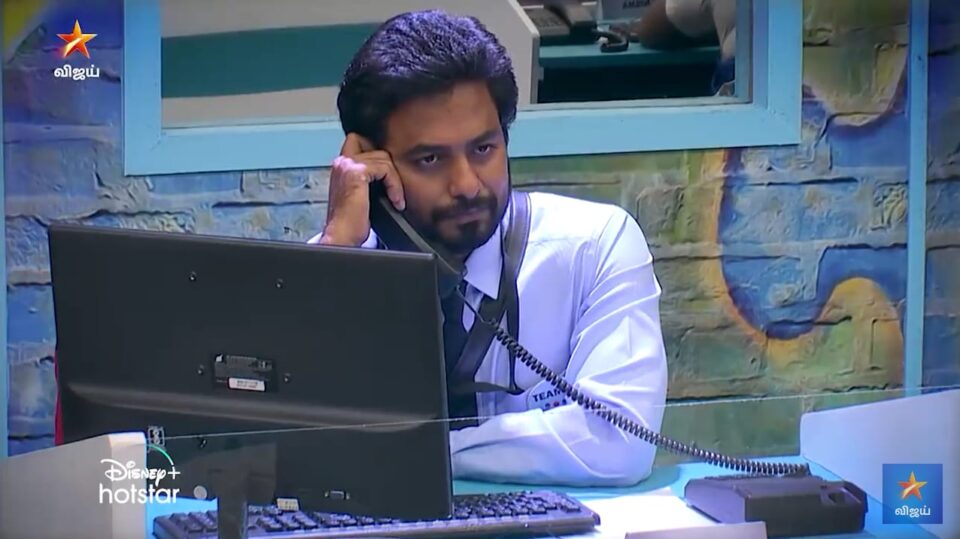 Bigg Boss Call Center task continues today which was left in the middle due to the rain situation when contestants were moved for a night outside of the BB house. Archana gets call from Aajeedh. This call helps Archana to put forth her honest, constructive criticism on the fellow contestants which couldn’t be taken out of context. Gaby-Som has a cute call. It seems Gaby returns the favor for Som’s pleasant call from last week. Her call is not only cute but also let everyone know who Som as a person. Som does a detour when he explained his struggle through his journey for 10 years. It quite upset him to remember his struggle.

Aari-Bala have a call which is more like a message from Bala than a conversation together. Bala drops all the baggage and hard feelings he has towards Aari without letting Aari to clarify his side. Bala disconnects the call but then when he takes the survey, he responds that he forget to ask Aari’s point of view. Bala mentions that Aari doesn’t practise what he speaks. Bala accuses Aari of tagging fellow contestants to devalue them in front of the audiences which Bala says it lacks sportsmanship. He says Aari said Anitha has inferiority complex, Sanam, Ramya is biased, Shivani is given a love angle to decredit her game. Bala even mentioned that Aari doesn’t ask Jithan Ramesh any question because of his film production background.

Bala is directly nominated for eviction through this task next week until he gets to shift the board to next one. Aari and others felt that the objective of the call is to devalue Aari’s game and doesn’t give room or listen to his point of view. But Bala just says he used to task to drop all the baggage down and he wants to get over.

Ramya, Anitha, Aajeedh playfully mock Shivani’s actions by imitating her in front her. Aajeedh mocks Nisha for making all the same jokes from her old shows and become housename for Vijay TV. They have fun. They split into 2 team and play a task in which the loser gets knocked on get by eggs. Sanam loses thrice and couldn’t keep her temper for a while. This week, Sanam, Shivani, Aajeedh, Nisha, Aari, Anitha are facing eviction.