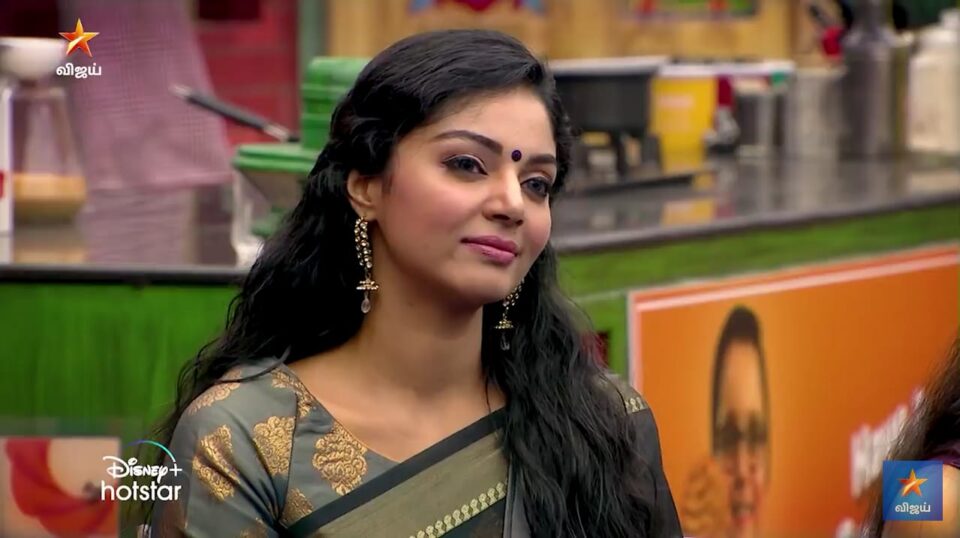 After a tumultuous week in which housemates carry mental blockage with each other, they try to put it to the end this weekend with the host Kamal Hassan. Since Thursday, the contestants are individually asked for their contribution to this show and maintain the secrecy about it to the other contestants. They have fun have not revealing to those who don’t know of the game and sharing the pain of disappointment and embarrassment about their own effort in the show. Anitha is asked the same and she wasn’t interrupted not even once by Bigg Boss when she explained her contribution. It’s evident the show has any content to showcase with what Anitha, Rio, Bala, Aari, Sanam, Archana are doing. We haven’t seen BB asking these fellas yet.
Today’s episode seems to have worked so beautifully choreographed in tandem to discuss the issues one by one. Kamal greets the contestants starting with the criticism towards their team play at tasks. Gaby-Som seem to have returned the favor to each other without pertaining to the rules of the game. It reflects the same between Nisha-Ramesh too. Kamal puts forth a strong polite criticism towards Nisha, a debater, a strong stage presenter in real life, seems to have underplayed herself in the game. Nisha is too disappointed with herself and the other contestants realise their mistakes to save the favourite person on the other side.

Kamal comes to the issue when ranking for the call center task happened. Sanam wasn’t given an equal opportunity to receive a call like others which didn’t allow fellow contestants to give a fair ranking. Kamal asked Ramesh if he feels rattled to talk to Sanam and chose the compatible calling partner Nisha in the hope of getting saved. Ramesh denied that he didn’t expect to be saved. Ramesh might have felt he would rather lose to Nisha rather with Sanam but he accepts that he was a bit rattled to call Sanam. Sanam is given another opportunity to receive a call from Ramesh for 5 minutes in the middle Kamal hosting. Ramesh didn’t have any validly provoking questions for Sanam and the questions he asked, wasn’t completely answered in the few mins.

Kamal comes to Bala who slapped himself with his shoe when he was talking to Sanam. Sanam felt that it was an insulting gesture and felt down as no one stood for her to ask why to Bala. Even Archana who upholds love in the house, seems to have taken a “exasperated leave” as per Kamal’s words and leniency as per Sanam’s word, didn’t ask Bala why and didn’t stood along with Sanam. Kamal stands for Sanam today. It was known that Archana criticized Sanam for standing up for her chance and also didn’t really bothered much to care for Sanam’s insult. She later that night only advised Bala not to lose temper and justified his emotions by meaning she too is intolerable towards Sanam. But in today’s episode, before Kamal, Archana says she later told Bala that his actions were wrong but she just hides the fact that she didn’t honestly stand for Sanam that night. Today, she apologized to Sanam, saying that she should have asked Bala for ending the conflict raised on her name.

Kamal equated Bala’s actions to domestic violence and told Bala that he, a victim of one such act, should have known better than hitting himself with slipper. Kamal encourages logically, politely explaining each other’s points as they only seem to go off the handle. Kamal criticized Bala to practice what he preaches as he stood for himself when he felt Aari didn’t give him respect while using his body language and Bala lost his temper for the same thing when Sanam pointed it out. Kamal advises him to treat each other with the same dignity they are expected to be treated. Bala doesn’t want to apologize as his intention was not to hurt Sanam but to blame himself for trying to converse with her. He says the same when Archana tells him to apologize. Then later, when Sanam pointed it out, Bala apologizes and Sanam accepts its half-heartedly. Gaby seems to have confused for after every fight Sanam has been part of, how she is being stood for by Kamal.

Kamal shows his favorite “Kurum Padam” (Short film) this week to clarify Bala-Ramesh-Ramya captaincy task. Bala kepts saying that the verdict was unfair as there wasn’t an individual assigned to watch Ramesh’s game. Rio watched for Ramesh and also overall of others too. Kamal told Bala that he has a mental block that Aari would always work against him because of the baggage. Aari said he didn’t carry as such. It was clear from the short snip that Bala isn’t clear of his game and confidently blamed others for his conspiracy theories. Kamal announces the Aari and Ramya are saved today. Nisha, Anitha, Sanam, Aajeedh and Shivani are facing the eviction.