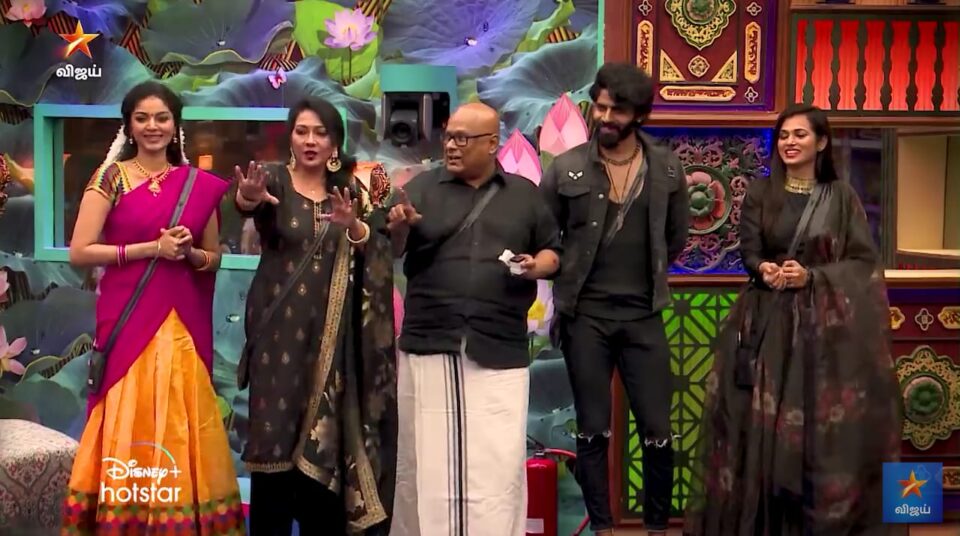 Today, contestants continue to vote each other who won their hearts and broken them. Kamal Hasan, the host, begins the episode by advising Bala that he is entitled to hold his opinions but he owes it to the forum to let his mind and his criticism know in a decent way. Bala processes it in a constructive manner.

16 contestants vote each other yet again to let people know who won their hearts and broken them since the first similar task, since then they have begun to break the ice and continue to learn about each other. Suresh, Rekha and Shivani got broken hearts in most number initially. Today, they have considerably reduced their no. of broken hearts in half. Kamal lauds their effort and progress.
People who used to on the bad side before now learn and shift their places. Sanam-Samyuktha-Bala now stand against each other in their own opinions. Nisha-Rekha-Bala begun to break the ice and started to understand each other. Rio, Som, Aari, Jithan Ramesh are beginning to bond as a team. Gabriella, Shivani, Aajeesh, Ramya have a beautiful bloom between them.

Ramya’s captaincy is discussed and she herself pointed out the flaws in her decisions which is appreciated for the courage to admit them. Kamal presents the complaints letters from the audience to them on the captaincy. He advises them to learn from the constructive criticism.

Kamal selects Shivani, Suresh, Rekha who won many broken hearts as candidates for the next captaincy. Suresh won the most votes to become the next captain and Kamal takes this opportunity to insist on the importance of election, the responsibility of leadership and the downhill of unopposed regime in democracy. He has begun to start giving Book Recommendation to the audience this season, an valuable additional feature. He missed to say the Tamil version of the book he mentioned last week. He suggested The Plague (Pandemic) book by Albert Camus which is translated into Tamil as “Kollai Noi” by Madanagopalanae. Kamal suggests the book by Saadat Hasan Manto which is translated into Tamil under the name “Avamananam” which consists of short, sharp, heartbreaking stories that will enrich the knowledge of the person who reads it. He fondly remembers how he regards Mr. Manto as his Guru, and He assisted and worked along with Nawasuddin Siddhique in his film Hey Ram who helped with Hindi dialogues, who went on to reprise the role of Manto in Director Nandhitha Das’s film. He remembers how Siddhique’s one of screen presence got edited in Hey Ram and now he has become one of greatest actors in the nation now.

He bids goodbye to the housemates before taking the opportunity to wish his daughter Akshara birthday wishes. Housemates, under Suresh’s captaincy, begins to distribute the responsibility to do their chores over their meals on the dining table. Suresh discusses with everyone and decides who does what and as soon as he finishes the speech, Sanam lets her opinion know that she is fine with his decision but she would have appreciated if Suresh would have asked everyone’s wish before assigning them the chores. Samyuktha defends Suresh and says against Sanam’s statement that Suresh indeed discussed and asked everyone before making a decision and Samyuktha adds that it would be appreciated if Sanam involves and listens a bit sharply to the discussions when it’s happening. Things don’t seem to get smoothened anytime soon and Some of them have started to take sides in the event of things.