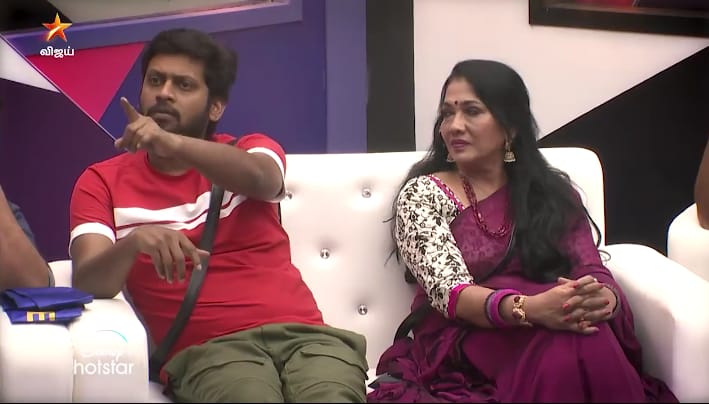 Second week in the Bigg Boss house begins and so does the problems. Sanam and suresh continue to hit off on the wrong side of each other in their cooking duties. Most of the housemates feel that Sanam tries not to listen when she is spoken to rather takes things out of context and expand a problem. And Suresh wears a very thin armour and easily becomes impatient.

Housemates are asked to assess their luxury budget. They time their calculation and completes the task only to find that they can either have the luxury budget groceries or they could have the Bedroom and Bathrooms from partial lockdown. They give up their luxuries finally. As the housemates enter the 2nd week, they face eviction nominations. From the “The road they travelled” task, contestants listened to each other stories and their journeys. Out of 16, 8 contestants are chosen for eviction nominations as their stories are comparatively happy ones. Rekha, Sanam, Shivani, Aajeedh, Suresh, Ramya, Gabriella, Samyuktha are the shortlisted ones.

As Suresh is the captain of this house this week, he is exempted from the nominations. Contestants are left with the 7 choices. Sanam got the most votes among the housemates as she becomes cause of many problems. Shivani is named for not mingling with the troop as much. Samyuktha is named for being part of Sanam-Bala problem in which Bala called the modeling organization Sanam was part of as fake. Gabriella, Ramya and Aajeedh are named for not coming out of their comfort zones yet.
Housemates organize a fun fashion show in which they get to expose whichever the talents they have. They did a ramp walk with the positive attitude they have. Out of which, Samyuktha and Jithan Ramesh are given the Best Dressed and Best Attitude titles respectively. After which, Shivani danced with a poise on the stage which is later “set on fire” (figuratively) by Gabriella’s stunning, energetic performance. Anitha Sampath left everyone dumbfounded with her amazing speech in Tamil which garners the achievements of the women of the world we live in since the civilization had begun till today. She won the hearts effortlessly. Suresh lightens the mood and the room with his funny imaginative story of how Bharthanatyam, a classical Indian dance, was found. He wins the Mr. Talented and Anitha wins Miss. Talented.

While Bala and Sanam be the judges of this events, as the final task, they pose direct questions to the participants. Shivani answers boldly about how one has to keep moving forward regardless of humiliations and obstacles one faces in the path and quotes Vivekananda “You become what you think”. Rio gives a straightforward answer when he was asked what kind of image he wants the people to know of him. He openly states that he is not revealing every single detail of his turmoils in life because he doesn’t want to be remembered for any of them. He is proud in that way and only wants the people to take away his gentleman-ism.

Suresh follows him on the stage to answer his turn of questions. Bala tries to induce his inclination towards dropping the truth bombs. It ends up a slight quarrel between Suresh and Rio. Suresh is asked if all of the housemates wears a mask beneath their socialization in the house. He said yes and pointed out Rio for quote him because everyone wants to be shown how they wish to be shown. This agitates Rio out of nowhere as he was quoting Rio for which Rio interpreted as Suresh is showing him as an example for how one would wear a mask. Rio doesn’t like to be taken for an example of a masked person and got offended by the remark. Suresh tries to explain he was just quoting him, not making him as an example which Rio is not ready to listen to.

As the events end, Nisha tells how much she misses her mother as it’s her birthday. She has never spent her birthdays away from her mother and this takes a toll on her. She receives a birthday cake from Bigg Boss and wishes from her home. A video message from her mother makes her emotional and leaves Samyuktha, Shivani in tears too. Rekha tries to console Nisha while everyone shares this melancholic happiness together.