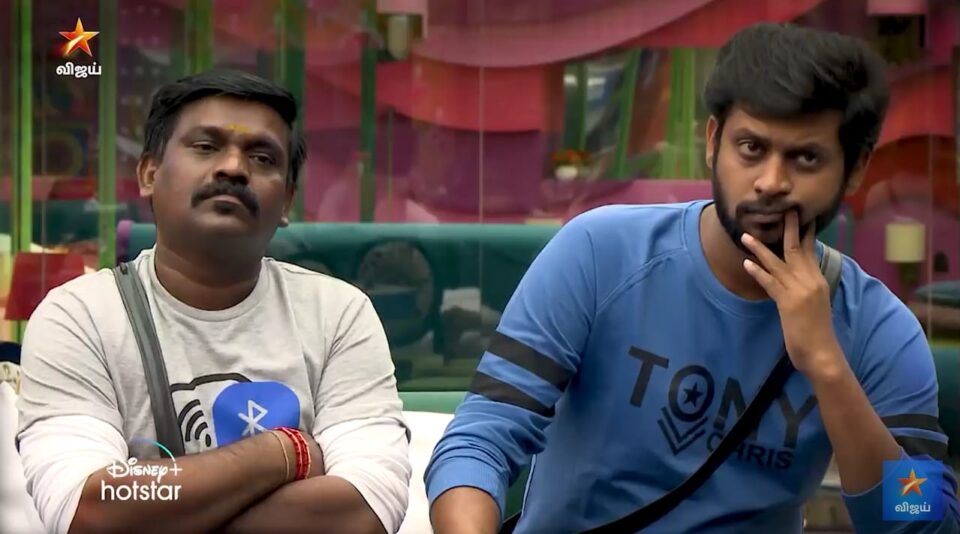 Today’s episode is so smacking, innovative and entertaining. One of the episodes in this season which really got a bit interesting today.

As the day begins as usual, the cooking team that seldom keeps their peace. Aajeedh, one of the less talkative persons in this mix, got irritated by the tone with which Suresh commanded him to do kitchen chores. Aajeedh stormed off. Later, Ramya tries to explain to Suresh that he is the one who shares a lot of work and he obviously gets agitated by his sudden tone in words because of the stress. Aajeedh calms down in a bit and comes back to the Kitchen. Suresh and Aajeedh both apologise to each other and smooths things out.

Bigg Boss introduces Eviction Pass task. He says who gets this Eviction Pass will help them in times of need during one of the evictions. 8 of the Contestants who were named to have not met much of the challenges in their journeys. Rekha, Sanam, Gabriella, Suresh, Shivani, Ramya, Aajeedh and Samyuktha are asked to play this game. Suresh is the captain of the house who is excluded from this week’s eviction is still asked to play this game.

8 of them gets into a room and sit in circle. Rule of the game is who is left last in the room, gets to have the Eviction Pass. Everyone needs to discuss and vote out each other one by one until the last remains inside the room. Suresh initiates the game by saying we go in the order based of no. Of maximum votes who has got in this week eviction nomination. It starts with Sanam by his calculation.

Suresh convinces the other 7 to vote against Sanam to stay inside the room. Sanam tries to convince why she needs to stay inside but this strategic, psychological game doesn’t favour her. Suresh does the same with Shivani, Samyuktha, Rekha and they leave the room one after the other but not before stating why they deserve to be in the game and also with the confidence that even without this Eviction Pass, they believe they can survive this game.

When the game came to Gabriella, she tries to convince Ramya and Aajeedh in the room that this game is not fair as Suresh strategises to go by the order in which who got maximum no. Of nomination votes for eviction this week, whereas he is not even voted for the same, which means, by the order he is at zero who tends to stay remain till last. But Gaby couldn’t pursue them and win them over as Suresh refuse to change his game order as he said everyone agreed in the beginning itself and objection must have been done in the beginning too. She also succumbs to Suresh’s strategy and leaves the room.

Now it’s Ramya, Aajeedh and Suresh. When Suresh still suggests to go by the voting order, Ramya objects and realises that it’s Suresh’s strategy. She pursues Aajeedh to vote against Suresh and now majority in the room is against Suresh. Suresh is so brainy and thrilled to be playing this game. It is hard to deny it was a joy to see him making this genius chess-like moves. He deserves credits for that.

And now the real fun begins. Suresh, Ramya and Aajeedh converse openly about other housemates as part of his game. Bigg Boss captures that conversation from a private room to the main hall TV. Suresh openly talks about the slight quarrel with Rio yesterday which was about who wears the masks in the house. He said everyone wears a mask and even Anitha too as she is just masking behind Kamal’s advise to hide his true self. Everyone is watching Suresh saying this.

Suresh brings up the groupism in the house which is evident to form anywhere in a crowd. He points to Rio, Nisha to be part of it. He says that he gave his new Dhoti to Velmurugan when he commented Suresh’s was nice. And for that, some other friends of Vel, in the house, threw a slight sight about this incident. Suresh said he fondly gave him which was not appreciated by some group of people here. He felt he was cornered. Suresh hasn’t got a close confidant in the house and by this time most of them is against him. He is helluva Bigg Boss Player too.

Sanam is sad to have sent out of the game as the first person. Anitha, Aari comes to console her to play the game honestly. He tells her only one of them is gonna win and the rest 15 have to go home, he said to cheer her up. Sanam is sensitive to deal with slight failures. Samyuktha takes the game as it is bravely but she is not grabbing enough attention.

Now inside the room, Ramya and Aajeedh succeed in sending Suresh out of the game. Suresh is so glad that he is able to be a tough competent to all of them. Now, Ramya and Aajeedh, as we know they share a sibling bond, it is difficult for Ramya to take up this opportunity from Aajeedh as he has gone through emotionally and financial difficulty at a very young age. Ramya feels Aajeedh deserves to take it. He wins it and Ramya wins the hearts.

As soon as they all come out the game room to the house, the housemates, who saw Suresh’s comments on TV, are hot as red iron. They are waiting for him to clarify some of his comments and tell him that he plays a dirty mind game (which is what the show is about).

Velmurugan is heavily hurt by the remark that Suresh gave his new dhoti to Vel out of compassion and fondness. He openly said about it which hurt Vel is some way. Suresh didn’t seem to have said it in an intention to look down upon Vel but surely Velmurugan took it as such. Vel felt he was humiliated in some way for which Suresh doesn’t have an answer. Velmurugan’s journey is a heartbreaking story. He wishes to change his identity as a struggling man. He somehow feels like such remarks from Suresh would never let him change his struggles and create him a new high-soaring identity.