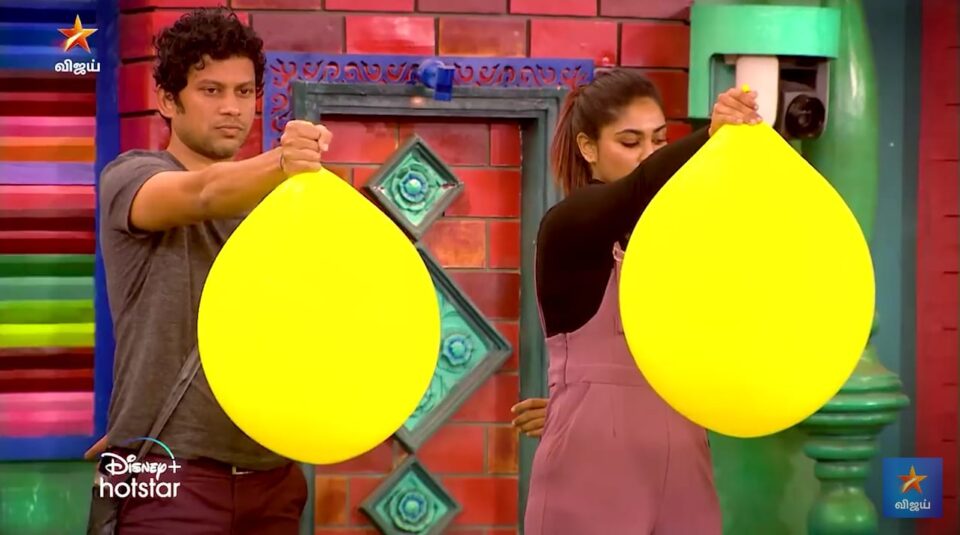 The last week before finale in Bigg Boss Tamil season 4 is here. And everyone is nominated for eviction since it’s the last week.

The day began with Ramy and Rio discuss about Rio’s way of telling things in circle instead of being to the point. He does it not to hurt the people he criticises but fellow contestants see it as a strategy to be on their good books, on safer side to avoid clash with them. Rio accepts he does it but not because to escape from the problem but to be decent in the way to tell others their mistakes. Gaby observes it from a distance. Later, Gaby tells Rio why he would accept to Ramya baseless accusation as if she stands by her words. Gaby recalls that Ramya says she would never involve in a problem which she isn’t part of but she was there in every problem which were mostly against Aari.

Meanwhile, Bala and Aari end up quarrelling again over the issues from last week while trying to smooth things out. Bala asks Aari’s explanation change with time and he couldn’t accept that Aari doesn’t have the ability to accept his mistakes like he points out others’.

Contestants openly nominate each other for the last eviction in the house. Aari nominates Rio for improperly validating Aari’s efforts. Rio explains clearly that he is someone respects people’s effort as he knows the value of it. Rio stands to his opinion clearly why he criticises Aari and he has a point. Aari doesn’t initiate an effort to mingle with them.

Ticket to finale tasks have begun. There are 2 tasks in which Bala wins the one which tested his body strength while it’s challenging for others and especially to the girls. They have to carry a water balloon above sharp nail pad in their arms without bending their elbows or knees for support. In which, Som did fouls but bursted the balloon only after Aari. Rio, as a captain, while focusing on his game, he ensures other plays it well by noticing each other fouls and Rio encourages to claim the rank. So Aari claims it but there is a little quarrel between Som and Aari as he did foul moves and bought some time before bursting his balloons. Som rereads rules on his own interest and embraces his actual rank and give Aari’s deserved place to him. But Aari refuses it even after it’s announced to Bigg Boss. Rio and Gaby compel Aari that rank he got is his to deserve.

They move on to second task which is to support a plank with their head on another wooden plywood. Gaby loses both games at first attempt and height and weight lifting are not her things. Shivani exceptionally played well until for the last 3 places with Rio and Ramya. At the end, Second task is won by Ramya after 30 mins of standing still. By the score, Rio is in lead after 2 tasks and Bala and Aari are in tie with score. They are still more ticket to Finale task awaiting until the weekend.