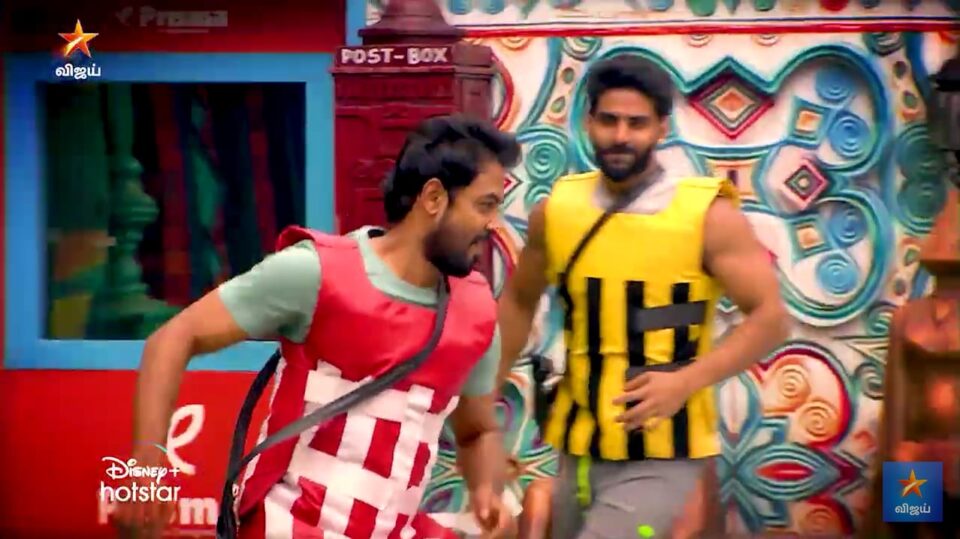 Ticket to finale tasks continue today too. Contestants wear velcro suit and a coin at their backs. The one who keeps it till the end is safe. While Bala tries to take Aari’s coin, Aari quarrelled that Bala plays an unfair game. Bala puts obstacles on Aari’s path to slow his running down. Aari finds it unfair and provokes him. Bala tries to keep his head straight and be polite till the end.

Bala took Shivani’s coin at last. He mentioned she is an easy target but Aari says Bala tries to give points to Shivani. While Som tries to take Ramya’s coin, he was distracted by Rio and Gaby conversation and blamed them for unintentionally distracting him as Ramya took his coin. Bala wins this task.

4th task of the ticket to finale is singing song to the prelude played for the contestants. Bala keeps touching the buzzer for all the preludes even though he doesn’t know the songs or momentarily forgets them. It denies others the chance. So, Bigg Boss changes that it will bring negative points to the contestants. At the end, Ramya, Som and Aari are given a tie breaker chance as those three were at zero score. And with just one chance, without any negative points, she is in the leading. And Shivani wins this 4th task.

Bala seems worrisom as he got so many negative points in the task and got the last place. Ramya and Shivani encourage him that he would score more in the upcoming task as only 4 of them have finished. The contestants seem to be in good terms with Aari after Kamal’s last week address at their animosity towards Aari.