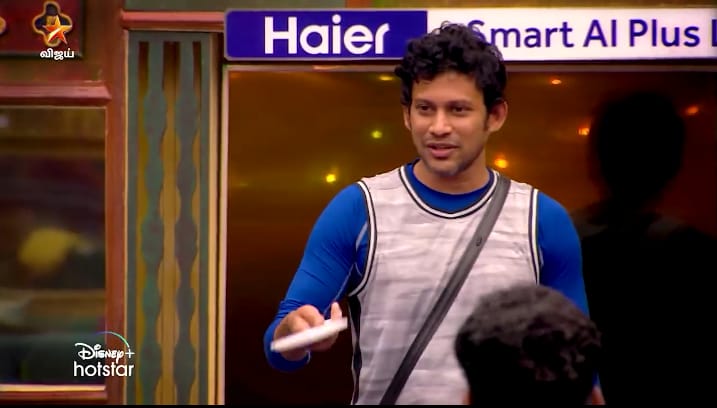 Ticket to the finale tasks continue to occur indoor due to the rain situation. Contestants are given a slanting plank to stand up on with a circular semi hollow piece with which the contestants rotate their balls in its path. The one who drops the ball is out of the game and they are asked to rotate the piece while walking on the slope. Rio wins the task successfully with a knack.

Next game, Contestants are asked to tell each other their flaws, strategy and plan. Until last week, it was a situation where Aari seems to be correct as the ones who oppose him showed themselves in a bad light so far. This week, they have got the clarity to rattle Aari’s game and show him as he is no better than any of them there. Ramya says it clearly as what Aari’s flaws are. Partly because, she was compared by an audience for why she doesn’t live up to the par that Aari has set. Ramya puts forth that Aari influences audiences on what’s right and what’s wrong by calling out a way of someone’s game as a flaw.

Bala puts forth his point precisely and perfectly, especially when he called Gaby of wearing a mask of less competitive and calling Ramya as playing selfish game as she didn’t ask him when he made mistakes which he says she should have. Som does his part clearly too without any inhibitions. He called Aari as another camera inside the house besides 70 cameras. At the end of the game, the contestants are asked to rank themselves based on who has more flaws.

Aari got the point as a person with more flaws. Following him, Bala got it next. It’s Som who got the most points with less flaws in the house. There are still more ticket to finale tasks awaiting to be played.