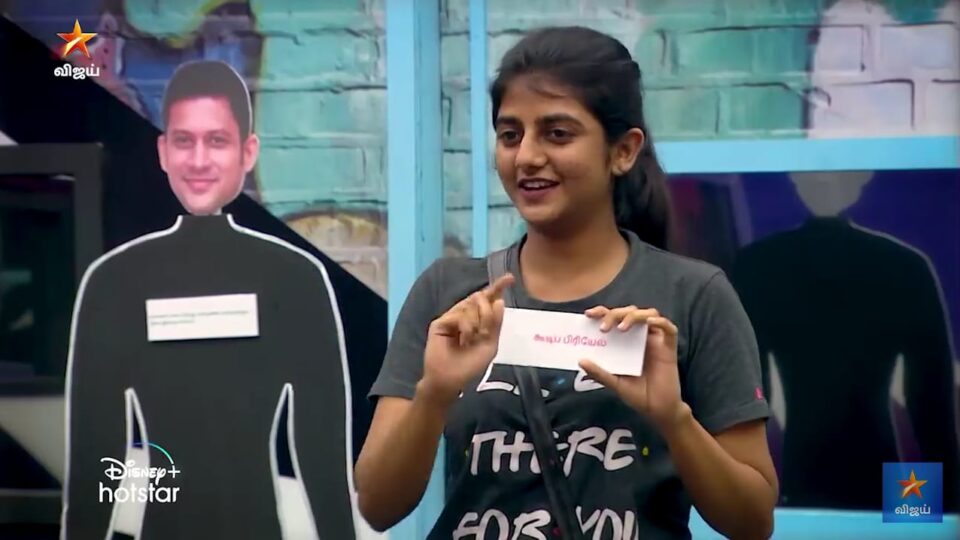 Ticket to finale tasks continue to test the endurance of the contestants. First task of Day 95 is one on one between contestants. They pick up a chit with their names on it and choose their competitor. They roll on the floor to pick up the ball from one end of the ring to another ring. Gaby is the star of the task. They had to do a tie breaker between Som and Gaby to choose the winner. Som wins it but Gaby gives a tough fight to Som and Bala. Ramya takes maximum time to do this physical task comparatively and takes the last place. Bala got a special power from winning the hen and egg task, so he gets to choose his competitors. He chooses Gaby and Gaby exceptionally plays and wins it.

Hershey’s task to share each other the best friendly moments. Som names Aari. Ramya and Shivani tell each other. Gaby tells Bala while Bala tells Ramya. Their moments are complied into an AV and played to them. They see Aari and Rio moment where Aari seemed so happy and smiley.

Second task of the day is to pick a tamil slogan and assign to the person whom it suits. Aari is called for wasting his time giving advice and he gets to have few fun moments too. He is told he hurts using harsh words. Shivani is told she wastes time worrying. Bala is said not to worry about sorrow and the one who thinks out of the box. Som is said the one who remembers the goodness and being grateful for them. The task is suspended in the middle due to time constraints and continues tomorrow.