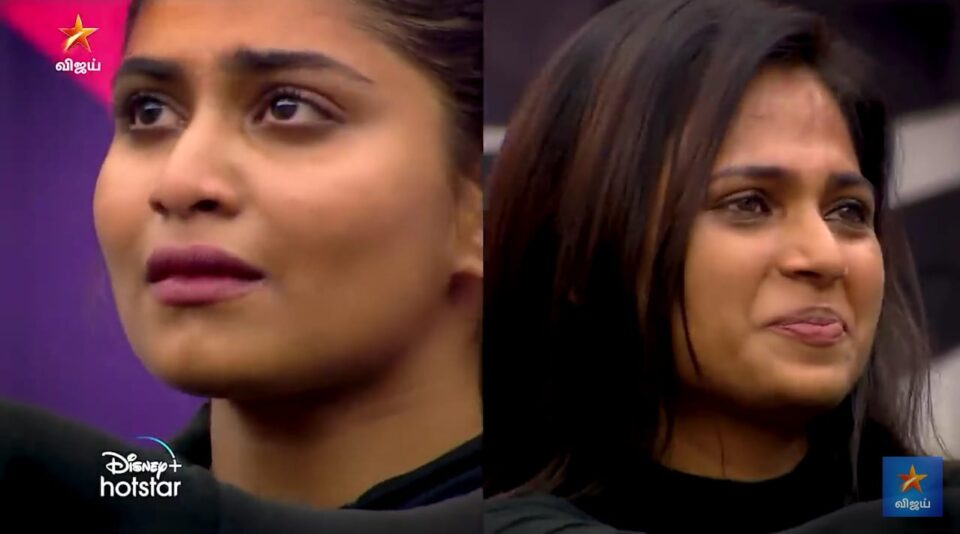 Last eviction nears Bigg Boss Tamil season 4. Ticket to finale tasks continue today too. Contestants assign each other positive and negative slogans that brings them positive and negative marks respectively. Aari mentions to Ramya and other contestants their inability to receive criticism about them patiently. Rio is mentioned he is a confused person. Som is said to be the person who makes people the most happy. Out of this task, Som wins it and in the lead.

Bala, Aari and Ramya talk about how they couldn’t be in the reach of the ticket as Bala was sure of winning any task presented to him. He accepts it tests his endurance. Aari mentioned the numbering game (which makes the most favourite person wins rather the deserved person) end by this week. Som is offended by it but doesn’t show it to Aari and tells it to Rio. Rio agrees he’s offended too.

Final task of the series is to hold on to the long rope from the cylindrical piller around that at the center of the room. Bala mistakenly takes off one of his hand from the rope for a second which is against the rule. When it’s pointed out, he claims it to be a mistake but doesn’t drop off the game. Then Bala drops followed by Aari. Rio accidently does once and Som does it too. Som’s feet seem to be out of the ramp that was given to him but he says his shoes are larger but the toes are at the right mark. He even asks Aari to remove his shoes to check it.

Bala and Aari quarrel as the Aari mentioned Bala’s ability to grasp the rules in the ticket to finale task is surprising for him and sounds to be questioning his sportsmanship. Bala then talks it out to patch it up. At the end, Shivani and Ramya are competing each other against all the pains. The two girls are given a royal salute with singapenne song while they do their task sincerely. Ramya, who usually doesn’t get easily emotional, tears up at the encouragement and Shivani wells up too. They are still standing off and the result will be known tomorrow. Som is in the lead so far to win the Ticket to finale.