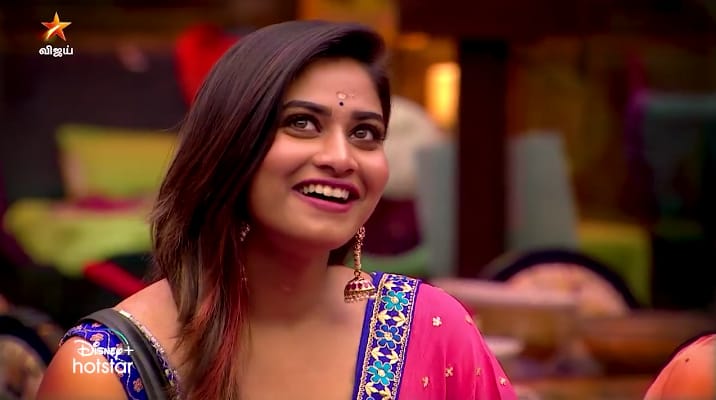 Shivani gets evicted after almost reaching towards the finale week. Kamal meets the contestants but only talked most about his Virumandi film which came out in 2004 for Pongal festival. The film gets its OTT rights by Prime Video. He talked about his experiences with this film.

Contestants are asked what they wish to do once they get out. Most of them say they need a secluded vacation with their closed ones. And no one mentioned their cell phones which is a good improvement to this generation of people is what Kamal thinks. A communication tool has to stay what it is without taking over us. They were asked what their final speech would be if they won the title too.

When he saves Bala as the third finalist, Bala got emotional as he was afraid he would be tagged as a bad influence to the society. He was grateful and thankful for being embraced by the audiences with all his flaws and grit. Next, Kamal saves Rio for the finale. Among, Ramya, Gaby and Shivani, Kamal saves Ramya and wait to reveal who gets evicted. It’s Shivani leaving the game who wished to stay till the final. Her genuine and diplomatic characteristics only push her till the week before finale. She exhibited high resilience and eagerness to reach the final line in the Ticket to Finale tasks. Despite her huge effort, she had to leave the game with only that respect. She is emotional to leave the game like how one misses to leave their friends. Other contestants are disappointed too to see her leave.

Kamal ensures Shivani that her qualities are much needed in the outside world. He admires her grit and wishes her the best. The woman of few words leave with a hearty good bye with only a tinge of disappointment to have only almost reached this final line. Kamal wishes the finalists too to play a great game for the next week and leaves with Pongal wishes.

7 more days to go for finale!

AUS vs IND, 3rd Test- Indian batters show resistance as the match ends on a draw