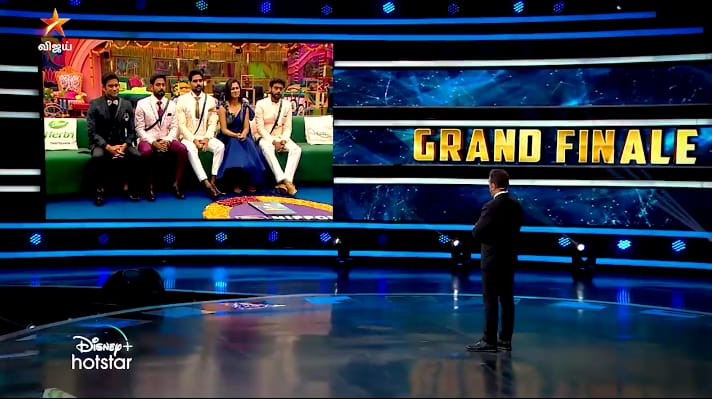 Bigg Boss Tamil 4 grand finale is here to deliver all the entertainment one seeks. Finale begins with Kamal addressing all the 13 contestants of this season who got evicted before this finale week. They are given awards based on their characteristics.

Aajeedh performed his singings. Archana did an excellent dance performances. Samyuktha was elegant in her dance sequences. Suchithra sang along with Singer Ranjith. Velmurugan sang a folk song.

While Aari, Bala, Rio, Ramya and Som were waiting inside the house for the great day, they were first given gifts. Som was presented with a beatbox to enrich his music skill. Ramya was given plants and fertilizers for her love for gardening. Rio was given a trekking kit for his vacation to forest. Bala was given dumbbells. Aari got pen and recycling paper for his inclination towards registering the injustice around him.

Mugen, Kavin and Sherin, the Bigg Boss Season 3 players, decorate the finale with their presence. Out of the 5 finalists, Som got the least votes and got evicted first of them. Mugen entered the house, entertained them and got Som out using an access card to the main door which said whose eviction conrfirmed and denied. Som’s final video compilation was played. With his music beatbox, Kamal performed a poetry he’d written. Som was given Mr. Clean, Bigg Boss award.

Kavin entered after Som’s departure. He encouraged the players about the life out of this house that’s waiting for them. He cheered up Rio who seemed to have low spirits. Kavin helps the players to find a newspaper hidden in the house. It came with a clue who gets evicted next and the clue read Ramya. Kavin took Ramya out of the house. She bid goodbye as chirpy as she usually she is. Kavin remembered his time in the same house last year and reminiscing his memories. Aftet playing Ramya’s video, she was praised for her strong game in the house and she joined the rest. Ramya was given Singapenne, Bigg Boss award.

Sherin came along to get the next contestant out of the house. She took Rio who was almost at the end of his rope to finish the game. He meets Kamal on stage and saw the video compiled for him. His face was brightened only when he was given Entertainer award from Bigg Boss for which he’d been yearning. And his wife Shruthi stays as a supportive person for the time in need for him to say the words he wanted to hear.

Kamal campaigned for the Kadhar cloth. He gifted all the 18 contestants Kadhar dresses for this finale occasion. Aari and Bala saw their videos compiled for them. Bala was awarded Gamechanger of Bigg Boss Tamil 4. Aari was awarded the Motivator.

Between Bala and Aari, The winner was to be chosen. Kamal entered the house. He expressed what he thought of both of their game courses which he didn’t think both of them would last this long. He appreciated the way they approached their game which Aari did logically and Bala did emotionally. They put on their kadhar attires and got on to the stage to face the real world.

Aari became the winner and won Rs. 50,00,000 Aari’s daughter Riya decorated the celebration by being on stage. Aari is the title winner of Bigg Boss Tamil Season 4.