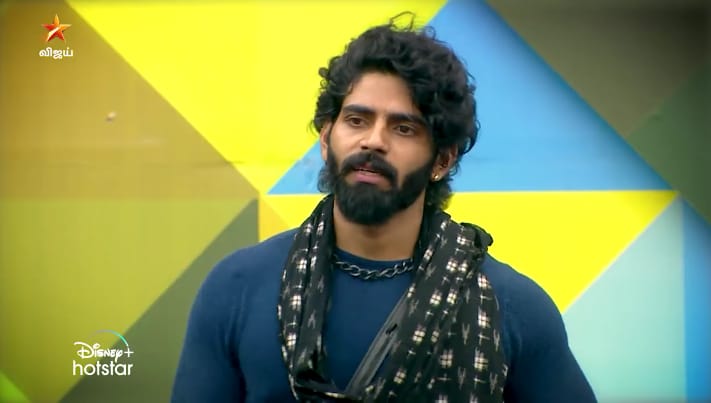 As the first weekend of Bigg Boss Tamil season 4 approaches, we know there is no eviction this week, But the nominations for the next weekend are already on the cards. Housemates share their personal stories all this week. The ice is broken now among them and even with the audiences.

Today, Som, Aajeedh, Ramya and Bala share their experiences and journey till the Bigg Boss stage. Som, who has been quite all this time, speaks out a lot today. His life was never the same when he began MMA (Mixed Martial Arts). He overcame his depression due to love failure. MMA turned around his life and began to get organized. He won the Azhagiya Thamil Magan title in Vijay TV but never pursued modeling after that. He has always been a quite kid since his young age and he reveals because he was suffering from stuttering since young age. He overcame his struggle and began rapping to surprise everyone.

Now, He has come to the Bigg Boss stage to discover himself.
Ramya Pandiyan puts a smile on everyone’s face with her heartwarming story. She has lost his dad at a very young age and began to take care of her financial needs by herself. She took part time job with Sathyam Cinemas and gave out pamphlets at the entrance. Through a pleasant accident, her photoshoot happened and invited an offer to act in a movie.

She took a risk and resigned the job she had but only to be replaced with someone else in that project. And only then Joker film happened to her which didn’t garner her the fame but the movie was critically acclaimed for its standard. She is yet again on the Bigg Boss stage to find her path. She has always been thinking twice before saying No to an opportunity rather to say Yes, as she is aware of the value of an opportunity before turning it down.

Aajeedh, the youngest contestant, talks like a big man who has seen a lot for his age. From the very young age, he has shared all the toils with his mother. He has seen the financial and emotional crisis and handled trust issues to become this matured for his age. Super Singer in Vijay TV shone the light on him but didn’t help him a way to discover a new path or new friends. He struggled to gain self-esteem and stands now on this stage just to embrace the opportunity. He believes in the honest game which will surely enrich the standard of the show.

Balaji, the fitness lover, has been a positive reinforcement you find in practical world. He has only been as a person who lends their shoulders who cry over silly things in the house. He reveals what kind of emotional baggage he has been carrying all along. He wasn’t blessed with caring parents. He reminds you of the Zain from Capernaum who was brought into the world by his parents and left uncared completely. He always envied the people who had the chance to showcase and brim their love for their good parents. All he reserved was disappointment, discouragement and pain from his childhood. He wasn’t blessed with friendship too as his family didn’t give a reputation for other kids’ family to play with them.

He built himself and took care of the only thing that was in his control, his physique. He put all his frustration as a fuel to his work out. He build six pack in 45 days, participated in Mr. India competition, organized by The Times of India. He was shortlisted in Top 100 among many North Indian body builders. He wasn’t well off to groom himself in dresses and hairstyle and got a godlike physique to give a tough competition. He became one of the models in Top 16 and to taste the first victory in his life made him emotional to share it on this Bigg Boss Stage. His story really wrecked many hearts. Bala leave you with a message that not having children is an option and people who don’t bother to raise kids better not give birth to them, which is one of kindest things they might do for such poor souls.

There are slight friction between Rekha and Sanam. Velmurugan entertains the crowd with a happy song in the day for which they enthusiastically danced around. And Vel lulls Rio and Anitha to sleep with his emotional lullaby which made Anitha reminds of her mother and made her cry.
Out of 16 participants, 8 of their stories didn’t win everyone’s heart. Suresh, Rekha, Sanam, Shivani, Samyuktha, Aajeedh, Ramya, Gabriella are listed for next weekend’s eviction nomination. Contestants have just become slowly to unravel the stories lie inside each other. They also slowly begin get under each other’s skin.