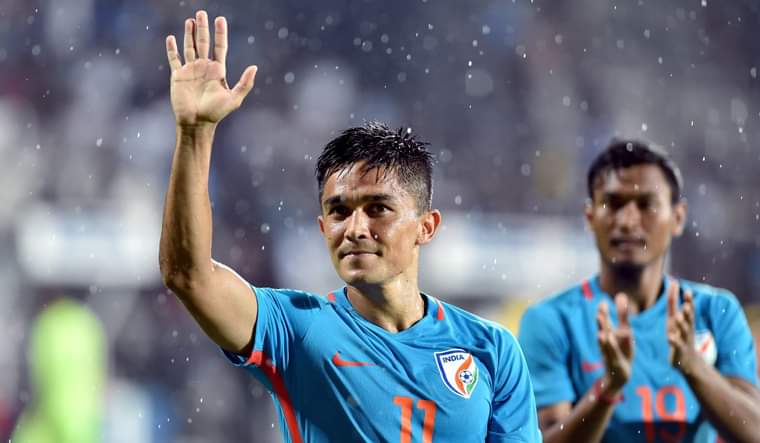 From a small wiry kid emerging from the shadows of Bhutia to become India’s captain fantastic. Sunil Chhetri has given so much to the country which most of the times went unnoticed.

Born in Secundrabad, Chhetri didn’t have to look outside for the inspiration as his Engineer father played football for Indian army whereas his mother represented Nepal National team.

However, Chhetri wasn’t all into Football and he played the game initially for fun. His only aim was to get a sports certificate to get into St. Stephen’s college. Things took a turn when Mohan Bagan saw him playing for Durand Cup.

His good performances got him into the Under-20 team. His two goals against Bhutan where India won 4-1 in the 2004 SAF games made heads turn.

He slowly went on to debut for the senior team in 2005. His first senior goals came against Pakistan. Probably, the best moment for Chhetri was that he was able to play along with his idol Bhutia.

The following years saw Chhetri doing well for the Indian team by helping India to win the Nehru Cup, 2008 AFC Challenge Cup.
Thanks to his good performances, Chhetri went on to lead the team from 2010. Since then there is no looking back. Chhetri has always been the marquee player of the Indian team. He went on to break and create new milestones. Under him, India did see a huge leap in the rankings. He is one of the most aggressive captains in the world for sure.

He stands just behind Cristiano Ronaldo when it comes to the number of international goals among the active players and is the only Indian in the top 10 when taken in total with 72 goals.

*
Now, support for football is actively increasing in this cricket-loving country. Hopefully, with one step at a time, India soon will achieve bigger things in the game, and I’m sure, Chhetri will be having a major role to play.

*
Fun fact: Chhetri is a bit superstitious. He believes that if he drops something before the match, well, unintentionally, he would score that day. In an interview, he said that it worked out for him 9 out of 10 times.