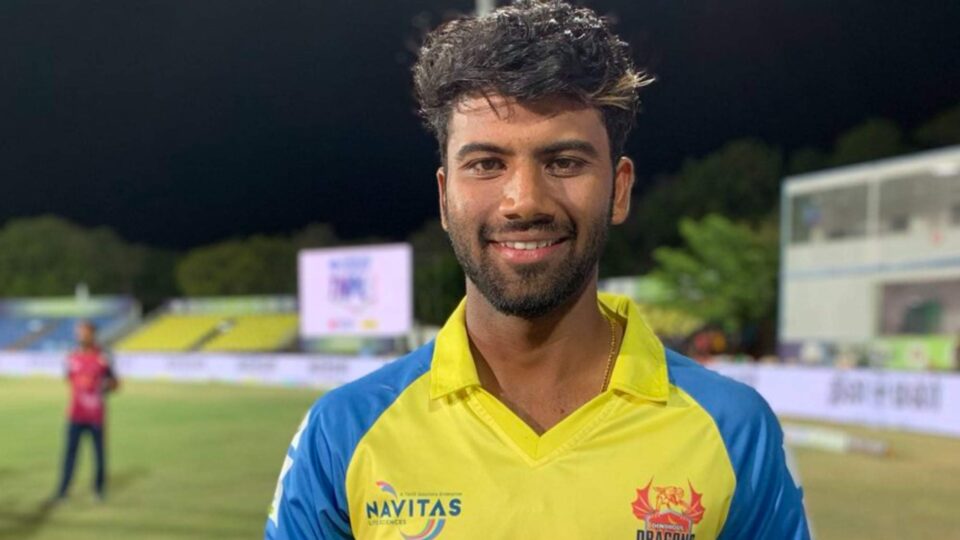 Nishanth and Jagadeesan are like the opposite poles of the magnet but with a single aim- to win matches. First things first, Nishanth bats left and bowls a little, Jagadeesan bat right and keeps wicket. Nishanth had opened the innings in almost every single match of his career while Jagadeesan batted at number three or four in most games during his age cricket and went on to open as well. Nishanth would go berserk from ball one while Jagadeesan likes to keep it calm then take on bowlers and play long innings. Opposites attract they say, and in the case of Nishanth and Jagadeesan, it’s true.

They share the best rapport on field; know each other for more than a decade now. They are playing together since their under-13 age. They both had represented many clubs together including Sri Ramakrishna Mills Sports Club, United Friends Cricket Club, Age cricket. Under-13. Under-16 to South Zone under-19. They even went to PSG College of Arts and Science. Probably, the only time when they didn’t play together was when Nishaanth represented Vijay Cricket Club while Jagadeesan played for GrandSlam in the VA Parthasarathy Trophy.

Nobody understands the other better and they perfectly fit. Adding more, Jagadeesan is more of that first bench student, everyone’s favourite while Nishanth is that last bench boy who is a typical rebel.

Sometimes, it works for Nishanth and sometimes, it doesn’t but when it works, it works way too good that you don’t remember his poor run. There will be smooth drives that would make your jaw bow down and the knock would come at a quick pace. Something, this T20 generation would love.

But again, it takes time for people to fall in love with this rebel. Nishanth had to wait for that time. In fact, his father would get more frustrated than anyone else every time Nishanth throws his wicket away. Of course, he has all the rights to. Mr Cheliyan was the sole break-winner of the family of four and his sister had to give up on her dreams of becoming a doctor to help Nishanth succeed in cricket. His father wanted to be a cricketer but ended up as a physical education teacher.

Now, living the family’s dream isn’t easy. It comes with the badge of responsibility but this is Nishanth and he does what he does on the field. It took years and his coach A.G. Gurusamy to change the perspective of how people see him. Though the family do get angry when he throws away his wicket, they probably would’ve accepted it by now.

Of course, being a die-hard fan of Mark Greatbatch, Nishanth’s father do know that being a pinch-hitter or an attacking batter is an exciting way to play the game and is good too. Greatbatch had an influence on Nishanth’s father that he made Nishanth switch from right-handed batter to the left.

While Nishanth had a decent run in almost all the tournament he had played, his first big tournament was Cooch Behar Trophy in 2013/2014 where he ended up scoring 352 runs from his six matches with three fifties to his name. This was probably the first time Nishanth had more runs than Jagadeesan in a bigger competition. Since then, he was scoring runs but unfortunately, Tamil Nadu had stalwarts in their line-up who stole the spotlight.

2019 was his year. Nishanth got into the Tamil Nadu team and went on to make his debut in all three formats for the team. That year, he ended with 125 runs with the best of 73* from the seven Syed Mushtaq Ali(SMAT) Matches he had played.

The season didn’t come without hiccups. Nishanth went on to throw his wicket away against Karnataka in the Super League match when he embarrassingly ran himself out. When the skipper Karthik sent him back, Nishanth ran in a zig-zag manner instead of diving to get back to the crease. This was way too careless and what made it, even more, worse was the live telecast. It certainly didn’t go well with the management and the assistant coach had asked him to be hard on himself for throwing the wicket away.

In the very next match, Nishanth proved himself by letting his bat do the job. He not only did play a long innings but made sure to take his team home. He had 44-ball 73* against Mumbai, had helped his team to pick up an impressive win.

This as well as the regular players’ non-availability due to national duty helped him to get an opportunity in the recently concluded SMAT. To add more, the selectors had decided to overlook Mukund because of the nature of his play.

This year, things were a bit different. Nishanth was ready to take a back step and let Jagadeesan take over the matches but when it was needed, Nishanth did stand up for the team and his 92* against Jharkhand was one the best knocks in this year’s SMAT. In the next match, Jagadeesan did most of the hitting and Nishanth stood there simply as a close spectator. He, however, made 47* runs from 40 deliveries. He ended the tournament with 246 runs.
**
IPL Auction witnessed some of the big names. Hari Nishanth was eating while his name came up. Nishanth went unsold earlier. It took Jagadeesan’s motivation to get dejected Nishanth back on track. Jagadeesan was right when he told Nishanth that the auction is not yet over as his name might come back later in the day. It did and to their luck, they will feature in Chennai Super Kings together. This is certainly a dream come true for Nishanth who now will play alongside some of the legends of the game and will share a dressing room with his favourite MS Dhoni. That’s there and to make it even more special, he will have his friend Jagadeesan by his side.

He might have to warm the bench because of the stalwarts in the line-up but Nishanth will not complain. He now will have the money to pay the family debts and would make some savings too.