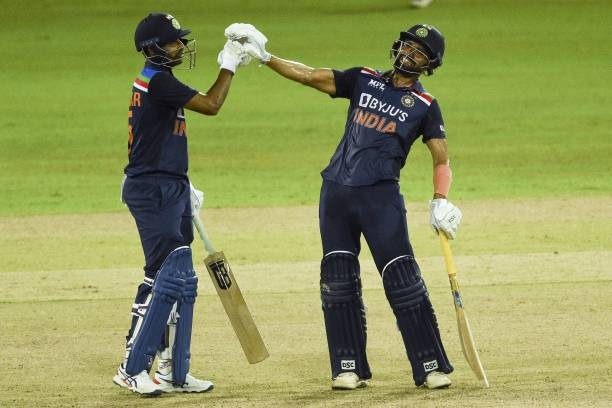 Swing. New Ball. Death Bowling. This is what one could relate Deepak Chahar with. The bowling skill is what brought Deepak Chahar into the Indian team.

But that was about to change.

Before Tuesday, Chahar had just one List-A fifty. We have seen go for chops and cuts here and there. We have seen him taking on bowlers, but that’s all were for fun. It is like drizzles down all the way in Chennai. It’s fun to watch, and we all know it is not going to last for a long time.

As Deepak Chahar came into bat, it rained (okay, a brief drizzle) in Chennai, something you don’t see that often. Of course, there is no connection between these two… or not. Of course, the numbers can be misleading in cricket just like the drizzles and the damages they could cause.

Sri Lanka was holding the Indian team’s ears and was cruising for their first win, in uncountable days. They meet the lower order now. No matter who was playing, every single Indian player has one thing in common, at least in recent times, they don’t give in or give up easily.

They like to drag things as much as they can and Chahar’s role was to do the same. With Bhuvneshwar Kumar, a bit experienced candidate at the other end, Chahar had to change his approach. He had to drop cuts and chop for a new challenge.

He kept running. Bhuvneshwar Kumar pushed him to run. They were taking all the opportunities that came their way to score runs. The Sri Lankan grip over Indian ears began to fall a bit as Chahar was dragging the team by their tail.

He made calculative strikes throughout the match. There were carves instead of chops, touches instead of thrust. He was ready to give away an over or two if the bowler was good, take Hasaranga’s final over.

As India was getting closer to the target, he treated himself with boundaries all over the ground but made sure not to overdo anything. The flick behind square leg became his go-to and there were placements through mid-wicket too.

Sri Lanka didn’t take many chances as well. They wanted to stick to the plot that worked well against the Indian top order but couldn’t go through Chahar’s mind or his defense.

After silently dragging the team to the final over, it was only a fitting end to the knock as he freed his arms to score a boundary. Emotions then overflowed. Agony in Sri Lanka team’s faces, Happiness in India’s.

Chahar walked back with a win and in Chennai, as the rain stopped, it had already swept away the TNPL match for the day. When was the last time you saw that happen? When was the last time two matches fell down for the rain in Chennai? It doesn’t happen often. We might not see Chahar doing this often too. Maybe, that’s why they are called miracles.

Breaking: Dwayne Bravo comes out of T20I retirement, is available for World Cup

ENG vs IND, Day 2: England bounce back after Verma-Mandhana stand

Ishant Sharma ruled out of IPL 2020