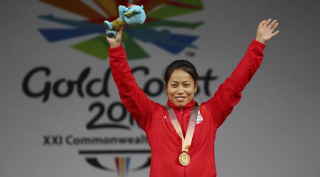 Two-time Commonwealth Games medallist Sanjita Chanu has tested a banned anabolic steroid and has been provisionally suspended, the International Weightlifting Federation (IWF) said on Thursday. Chanu the gold medal in the 53kg category at the Games in Gold Coast and 48kg in Glasgow four years ago.

Besides Chanu, four other weightlifters were named by the IWF in the latest list of athletes who had tested positive. Spain saw its first positive dope test in eight years with 21-year-old Marcos Velasco found a failure – who was European junior champion in 2016. Iuri Dudoglo, 26-year-old from Moldova, who also competed for Azerbaijan and was already serving an eight-year ban for a second offence, has also been announced as a failure. Also confirmed as failing by the IWF is Thailand’s Witoon Mingmoon – a bronze medallist at 56kg in last year’s IWF World Championships and the 2016 junior world champion. Anastassiya Ibrahimli, from Azerbaijan, who also competed for Kazakhstan, and who was a gold medallist at 69kg in last year’s Islamic Solidarity Games, finishes the list.

Sanjita had taken part in the 53kg class in the World Championship in Anaheim, the US in November last year, finishing 13th with a total lift of 177kg.
In Gold Coast, she lifted a total of 192kg to win the gold medal.

The federation on its website said, “IWF reports that the sample of Ms Sanjita Chanu Khumukcham (IND) has returned an Adverse Analytical Finding for Testosterone (S1.1 Anabolic Agents). As a consequence, the Athlete is provisionally suspended in view of a potential anti-doping rule violation.”

“In any case where it is determined that the Athlete did not commit an anti-doping rule violation, the relevant decision will also be published,” the IWF added.