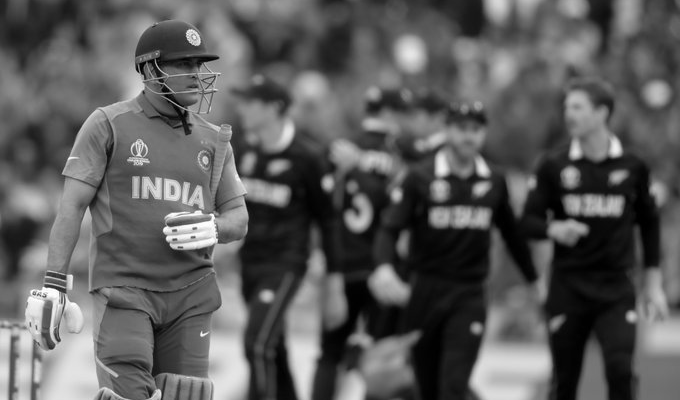 You were there whenever the team needed you. You were there even today. You were just a fingertip away from pulling a win along with your mentee. You stood tall when it was needed even when it’s not your best. Your mentee made sure to protect you because he knew you can pull this off any day even if he gets out. He tried his best. You did too. 99 out of 100 times, the fielder would have missed the throw because he had only one stump to aim at. You also thought the same, didn’t you?

We all know that if not for that run-out, you would have crossed the line for us and extended your World Cup, but it’s okay. It’s hard. It hurts, but what hurts more is to watch you walk back to the dressing room in slow-motion, drained. Dejected. Defeated.
Sometimes, we forget that you are mortal and you also age. There can be millions of what-ifs and whatnots after this game. People are going to question you. Your position. Your strike rate. Literally everything. Is retirement going to be the answer for it all?
Are you going to leave us all alone by creating void?

Of course, the game is bigger than a player. The team will have to move on and is talented, of course. But a player like you doesn’t come every day. You are special. You are a legend. A master. Are you not going to mentor the youngsters more before calling it a day?
Don’t you think they need you a bit more?

It’s up to you. It’s up to the team. You know better but to me, I badly want you to play till the T20 World Cup and win it, finish off where you started, finish off in style. Please. If only you can hear me.