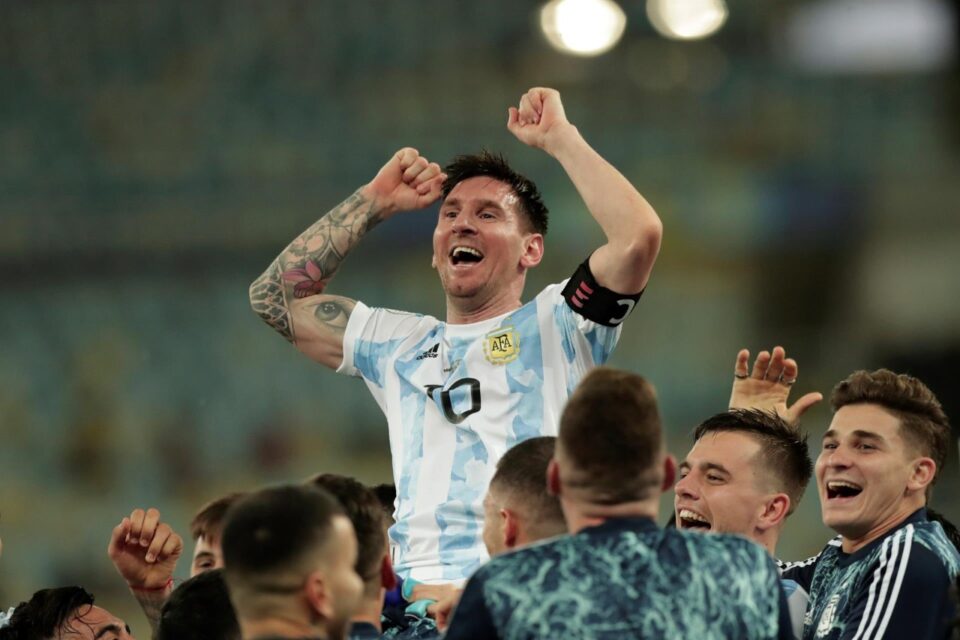 Football is a weird sport. Go, sit at a sports bar. Talk to a few fans there. You end up knowing more theories than it is actually there. But one thing that remains constant is the debate for the best player in the world. No matter where you come from, this one puts all the fans under the spotlight. The emotions involved here makes it more than just a topic of discussion.

It gets weirder when the star players play for their country. Nobody knows what happens to them and not everyone brings themselves whenever they play for their national team. Most people usually find it difficult to relate with Messi whenever he wore a blue and white striped shirt.

Of course, they have all the right to see him as someone else because Messi was seven when the nation had last experienced the glory. Most people weren’t born then and were young when Messi wore the National jersey for the first time.

Growing up, watching him play meant only one thing- Glory with the club and heartbreaks with the country. It moved from Messi to Mush and the mess in between. Every time he wore this jersey, things fluctuated. Romances were teased. The championships came closer yet were far. 2014 World Cup, multiple times Copa America. You name it.

The gap got bigger when he was ready to throw them all with his retirement. However, he came back for the country in the 2018 World Cup. The dream only went further away as Argentina stood there, without any answers for the eventual champions, France.

All these matches had a few things in common, and one of them is pictures and reactions. Google each year where Argentina had a heartbreaking end. You will see a dejected Messi, heads down. There would be another image- A sad Messi in a zipped-up pose.

Well, all these were about to change when Argentina locked horns with Brazil in the final. Messi came toe-to-toe with his friend-turned-rival (for the day), Neymar. Now, Argentina got there, a little bit untested against a strong team like Brazil. Also, undoubtedly, Brazil is a better team on papers, who had breezed past all their challengers to get to the final.

Having played every single minute here, Messi was already dragging his bruised body to a new level. The hamstring problems weren’t on his mind, but winning was. Despite not being on the scoresheet for a couple of games, Messi did have his chances, and he was still posing as danger.

Lesser did anyone know that the deciding goal would come from Angel Di Maria, someone, who had featured more on the bench than in the play. A long pass from Rodrigo de Paul coupled with a wee bit of crappy defence from the left-back Renan Lodi gave Angel Di Maria full control of the ball which he lobbed over the goalkeeper Ederson.

Messi was the second teammate after Martinez to congratulate him, of course, happy. Not only because of the goal but also, the fact that he had found a company he longed for years. He wasn’t carrying the burden of the team all alone this time. As the minutes passed by, Brazil couldn’t get past the Argentina defenders.

As the match ended, Messi, full of tears, knelt down. His hands covered his face. A few Brazil players, on the other hand, had tears too, but the emotions were different.

Messi then recreated his old images and painted them with colours instead of black and white this time. He added a bit of smile to himself and it was everything he had wanted, his country had wanted.

His teammates then lifted him, threw him into the air. This got the chant from the crowd wilder.

Minutes later, Neymar and Messi shared the biggest hug. It was better than the best and showed how they valued their friendship. Soon, Messi got to the presentation area where he was called a couple of more times. In the end, when he got to the main trophy, he kissed it before lifting it into the air and then joined his teammates for a group photo.

Now, this might not erase the 2014 World Cup final memories at this stadium but can certainly push it down a bit. Nobody knows what’s in store for him now but one can be very sure that they can tick off a potential topic of debate next time they walk into one.

Pride month: 90YO comes out as gay