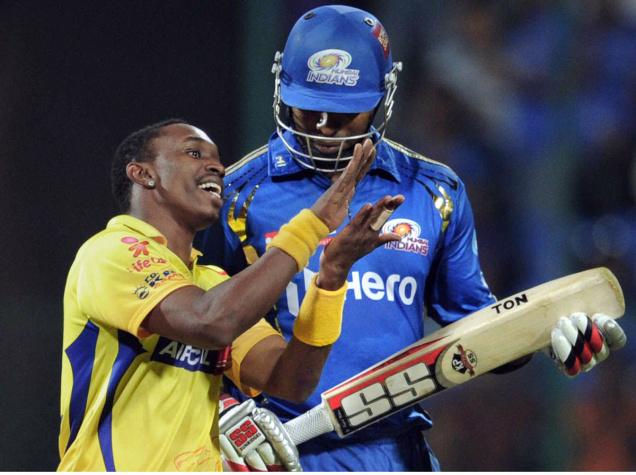 Speaking with Harsha Bhogle for Cricbuzz, Dwayne Bravo revealed that he recommended Kieron Pollard for Mumbai Indians in 2010.

Pollard and Bravo played together for Mumbai Indians in 2010. While the latter was bought by Chennai Super Kings in the next auction for an undisclosed price, Pollard has been the pillar of Mumbai Indians in the past decade.

The West Indian has won innumerable number of matches for Mumbai and played a vital role in their successful campaigns. Bravo said to Bhogle that he had suggested Pollard as his replacement in 2009. However, the franchise couldn’t get him.

Ahead of the next year’s auction Pollard had made his mark in the 2010 Champions League T20 for Trinidad and Tobago. He scored 146 runs in five matches at a strike rate of 197.29.

This time when Bravo suggested Pollard’s name, MI management didn’t think twice. Bravo said that Pollard was amazed when he saw the contract worth USD 200,000.

Both Bravo and Pollard have been the key players for Chennai and Mumbai respectively. While the battle between these two was well known, the story of Dwayne Bravo recommending Pollard was new for many.

Coach and players can agree to disagree and coexist. Can’t they?