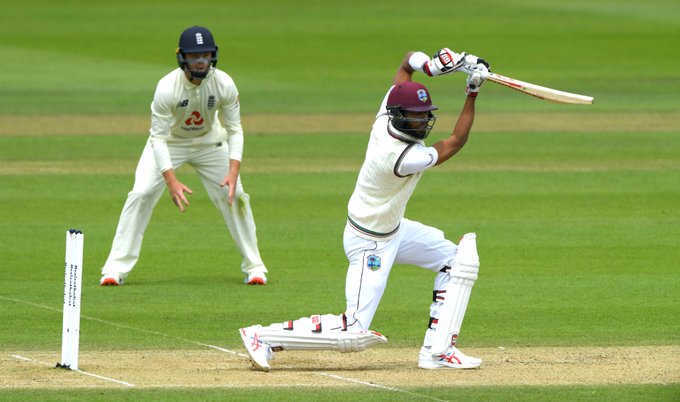 Cricket finally returned after 100+ days blame coronavirus pandemic and West Indies tasted the win against England at Ageas Bowl. Stokes replaced Root as the captain. Root had to travel back home due to the birth of his second child.

Stokes opted to bat first and he stunned with his team selection as he went ahead with Anderson, Wood, Archer. Broad had to sit out for the first time at home since 2012. Holder told that he was okay with the toss result as well.

Check this out too:

The rain-interrupted first day had England on the back foot and the second day was no different too. It was the captain Holder who led from the front by grabbing six wickets. He was supported by Gabriel with his four. England managed 204, thanks to Stokes and Buttler who shared a tiny partnership and then the cameos from the lower order.

Batting next, West Indies did quite well with eight of their players getting to double figures. The batting was led from the front by Brathwaite who had 65. Chase made 47 and Dowrich made 61. England had Stokes picking up four wickets and Anderson got three as West Indies made 318.

In the second innings, England began well with a 72-run partnership between Burns and Sibley. The latter made fifty while Burns scored 42. After losing Denly cheaply once again, Crawley and Stokes held the team together with a fine partnership. Crawley top-scored with 76 and Stokes had 46. Well, in a whisker, England lost four wickets for just 30 runs and found themselves in deep trouble. Archer’s beautiful 23 gave England a modest total of 313. For West Indies, it was Gabriel’s fifer that worked well as the visitors was on the front foot with only 200 to chase in the fourth innings.

Of course, it is a tricky total considering the pressure of the fourth innings and the match being in the final day. As expected, England found themselves on top as they pushed West Indies to 27 for 3 with Campbell being retired hurt after hit by Archer’s delivery and a broken toe was suspected. The tension prevailed for the first half of the day.

Blackwood, however, swallowed all the pressure to stand still at one end. Chase’s 37 and his partnership with Blackwood brought some smiles to the West Indies camp. After Chase’s dismissal, Dowrich made 20 and Holder made unbeaten 14.

The star of the match was definitely Blackwood for not only swallowing the pressure but also making sure that his team would cross the line. He fell five runs short of a well-deserved ton. Despite becoming impatient during the final moments, Blackwood played a sensible knock that will be remembered forever. After his dismissal, Campbell came back and stood unbeaten at eight as West Indies pulled off a victory at Southampton.