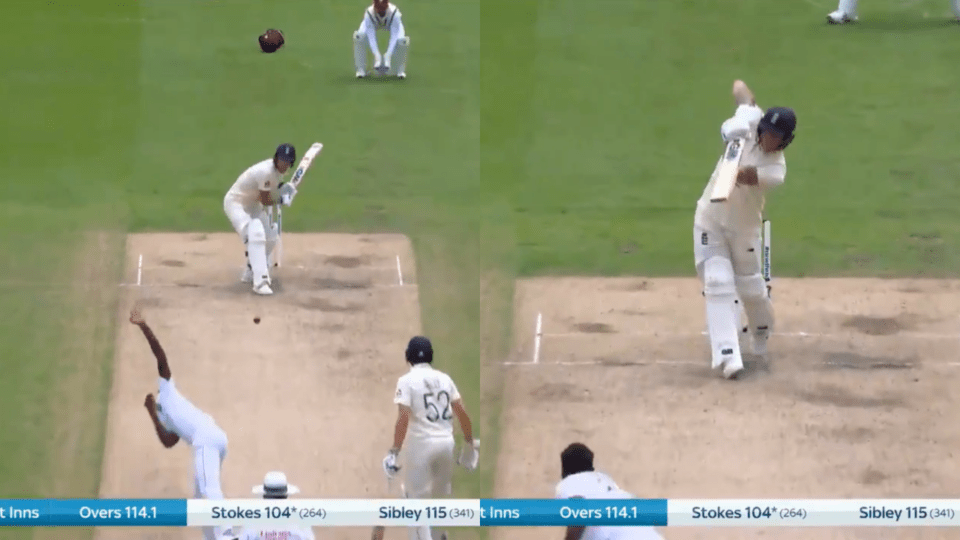 How do you explain a miracle shot? Do players really work for it? Does it come to them naturally? Oh, so players do believe in miracles, eh?

Sometimes, you do. Sometimes, you are forced to believe in miracles. You witness them and you have no other way around. Ben Stokes perhaps the “miraclest” man of the miracle. Yes, I had to make up my own word to explain how brilliant Stokes has been for more than a year or so. It is like the rise of the phoenix.

The first innings of Second Test witnessed Sibley and Stokes killing West Indies by draining them. It is a brutal treatment, you know. Especially when they are fast bowlers. They have to go back, a run-in with a hope of getting the batter out. Unfortunately, the only thing that goes down is their energy. There is no reaction from the batter. A pure well-left and a possible defence may be. They have to keep doing this until the batters give in. When the batter is in the form of his life, the work is double and it’s brutal.

Stokes and Sibley were killing the West Indies that day. They were draining them and all of a sudden you see Stokes pull off miracles.

Joseph is running in, to bowl the second ball of the over. He should be tired. He already worked hard, bent his back for 22 overs. Still, he was forced to do that. On the other hand, Stokes crossed his hundred and it was a different innings as he took his time. However, Sibley was enjoying his time and was exhibiting a beautiful display of patience that Stokes was in the non-striker’s end most of the time. Was Stokes inspiring by Sibley that day? He was showing similar skills too.

Now, you see Stokes. He is swinging his bat on air. His right leg is just in front of the leg stump while his left leg is covering the leg and middle. He swings the bat in such a way that the tip of the bat is just behind the face, almost touching it. There is a two-and-fro motion.

He was mooning all this while, and as he sees Joseph approaching, he straightens up. He stops swinging. He is probably telling us all that he is ready.

Joseph gets near the umpire now. Stokes responds it with a squat, his bat goes up once again, for the first time, the tip goes above his head. He moves his left leg towards the middle from leg-middle. His right leg follows. As Joseph releases, Stokes hits the trigger point, and his bat gets down. Joseph bends, Stokes waits as his bat tip is right near the shoulder. He is watching the ball and the bowler all this while. The ball now runs to kiss the pitch. Stokes watches it, moves his right leg a bit front. His foot now faces the mid-on. His left leg goes a bit backwards in search of balance. Still, facing the point.

The ball finally kisses the pitch. Stokes bends a bit again, and his left leg rotates from point to mid-on in a whisker as his bat hits the ball in full swing. When you hear the sweet sound of the ball hitting the bat, his right leg moves a bit upwards matching the movement of his bat. As he lifts his left leg, he sees the ball flying over the heads of Joseph. His glove is right parallel to his face. His left leg and his arms are in a straight line. You don’t see that often.

He loses his balance once again and his left leg goes beyond the off-stump and his right elbow goes above his head. Awkward. Stokes watches it fly in a direction that is a bit different from what he would have expected. He sees the ball goes for the six. He didn’t get his bat down or finished his swing. He stops right there as he hits the ball. Was he giving a pose to the photographer?

Then he holds the bat near his shoulders, looks at Sibley who probably looked at him in astonishment. Stokes couldn’t believe it too. His reaction says it all. It is a shot which he enjoyed the most. He knows he cannot produce another one like this. Or he might. Who knows. Stokes is a miracle man and currently, he is having the Midas touch. He can control nature. He can turn everything gold. Silver. Red. Whatever.

[…] had a poor start after losing early wickets- thanks to Chase, who picked up a fifer- but Sibley and Stokes turned everything around. The duo not only took their time to settle but also scored tons that put England on top. The hosts […]