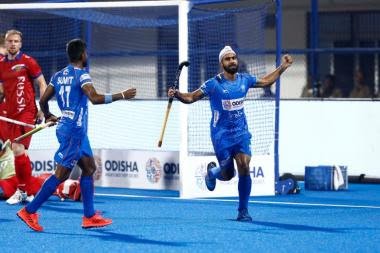 India are off to a flying start in the FIH series finals 2019 as they went on to produce a dominating performance against Russia to start their 2020 Olympics qualification campaign on a great note on Thursday.

The Indian domination started right from the word go who managed 48 circle entries and 22 shots on goal, converting 10 of them.

Whereas, Russia had only seven circle entries and they failed to convert them.

India will gain a lot of confidence as this was the first major game for the Manpreet Singh-led side under the guidance of new coach Graham Reid.

India will meet Poland in their second match on Friday.