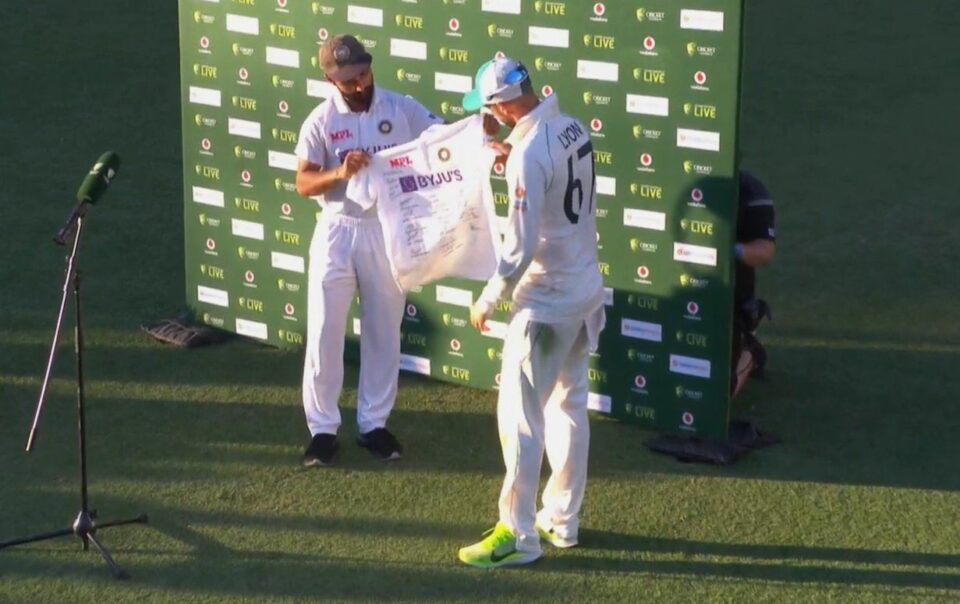 Rahane might be the kindest person we have seen. He has already done a few good things and has shown the team, the importance of good gestures. Be it calling Afghanistan team for a photograph, checking on Will Pucovski after he got injured during the practice game, his gesture to Jadeja when he got run-out during this Test series. It is all good and all nice-intended.

This time, he called up Lyon who had played his 100th Test today and gifted him a shirt which was signed by all the Indian cricketers. This is certainly a good gesture but it could be other ways too.

Of course, that might not be his idea but this team loves to give it back but subtly. You call it as Kusumbu Thanam, and this team is full of that. To call Lyon and to give him this shirt. It’s more than just a classic gesture.

Lyon just ate dust on his 100th Test. The man should’ve been celebrating the milestone as not everybody gets to represent the country for this long. He was supposed to lead the bowling attack for his team.

On usual days, he would be jumping around after getting those clusters of wickets. This time around, he had no clue and what makes it worse is that he was up against one of the most inexperienced teams. Everyone did underestimate India. He probably did too and that explains the shock on the face of everyone. For India, they had no idea who they had got through against the GOAT, for Australia, it’s the same reason but different emotion.

Now, this is an art. Not everyone can do it, not everyone gets it. Though detested, it is also a good form of respect. It’s mildly harsh, it’s fun but it’s still respect.

Imagine making someone walk this far to get a shirt signed up by the opponent team who had destroyed your dream and milestone. It would have felt like a walk of shame and more like collecting Razzie Awards. He had this poorly pixellated face and literally had to clap to cut short his walk of shame.

Now, is this bad from India? it depends on what dictionary you are looking at. One can define this as a class act because it’s Rahane and it’s more like his Vellaiya Irukuravan Poi Solla Maatan-ish image in the country, one can also define this as the Kusumbu thanam.

Nevertheless, it is not something that the game doesn’t want you to do. It is not against moral and al. So, it’s all good and at the end of the day, India still are the winners of the trophy, this act will remain a classic one and Lyon will always remain the GOAT. …It could just be a good gesture from the team… Who knows…

Upton reveals what separates Dhoni from others as captain