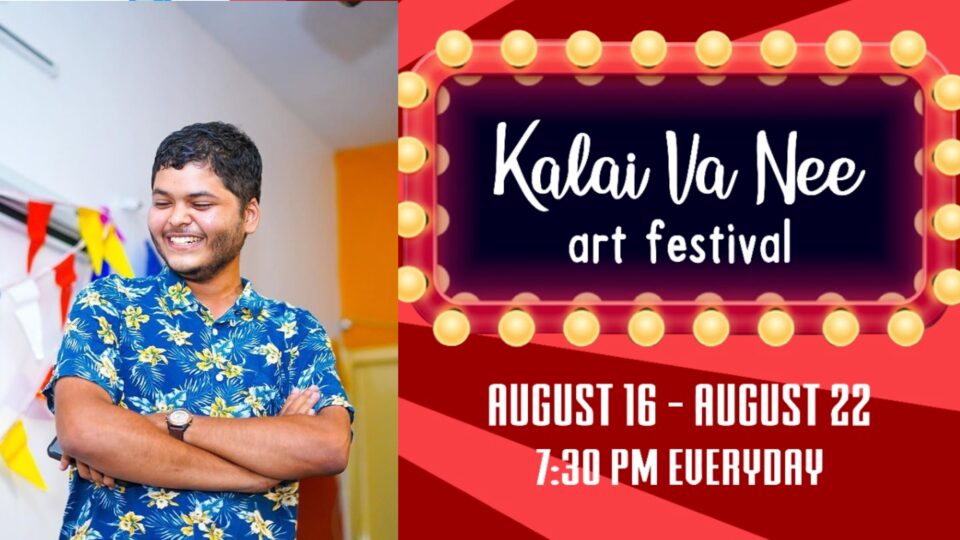 It is not often a stand-up comedy show in Tamil stands for inclusive values and does not ride on the jokes about privileged communities caste pride. Gurumurthy Rathnam wants ‘Kalai Va Nee’ to be one of those shows that breaks the barriers of gender, class and caste and become a platform for those who want to showcase their talent in any form of art.

What started as a free Google Meet session, has now transformed into a week-long art festival where close to 30 artists from diverse socio-cultural backgrounds perform music, stand-up comedy, poetry, storytelling and dance over zoom sessions. The ongoing festival started on August 16 and is scheduled until the coming Saturday. Tickets for the festival are available on insider.in at Rs 99 per head.

When Gurumurthy decided to pursue stand-up comedy during this lockdown, Kalai Va Nee was not the idea he had in mind. “I had initially planned to somehow put things together and perform my one hour solo special in May, however, the pandemic played spoilsport,” he says.

“When things looked very uncertain,” he says that it became extra pressurizing because he had quit his job in the hope that he’ll do well in standup comedy. “So, for the first 60 days of the lockdown, I didn’t pretty much do anything. I didn’t write a single joke till mid-June.”

As things became even more gloomy in July, Gurumurthy started feeling insecure. He started doubting whether he’ll make it big or not, will top comedy clubs in Chennai give him spots? He felt that the big clubs that run shows in Chennai do not treat every comic equally, and there is a bias.

“The term talent is used to divide comics, and I felt that the word is a myth. Everyone who gets on stage is talented. Or the stage helps them get better with their art. But what’s happening here is that the ones who are called better comics are the only ones getting stages, while the so-called not-so-good comedians don’t get as many chances. In fact, if you’re in the latter category, people are waiting to see you fail so that they can cite it as a good example,” he says.

Gurumurthy wanted to take things on his hands rather than depending on others for platforms to perform. He made use of the current scenario that people cannot go out to a show in a public space. He turned towards technology to create a virtual platform that is of no cost for him and other artists who generally do not get an opportunity in the mainstream stage.

“With platforms like Google Meet available for free, I decided to produce my own series of shows called Kalai Va Nee, where I’ll perform 30 minutes every day, and in addition to it, give chance to any artist from any art form, who belongs to an oppressed background (women, LGBTQIA+ community, oppressed castes etc.,).”

The show was free to whoever wanted to join, and by the end of the show, they could pay if they wished to. “So, even a single rupee earned became a profit for me,” he says.

When he wanted to repeat it, Gurumurthy felt the need to make some changes to the show. “I felt I was occupying a lot of space. Doing 30 minutes as a headliner and giving only 10 minutes to the other performer felt like an act of tokenism. Therefore I decided, I’ll cut down on my stage time in this edition, and give a stage for more performers.”

He invested what he earned from the first edition of the series to make it happen. “Once I break even with the series, every rupee from the profit will be distributed amongst all the 30 artists, because artists need to be paid. And that is how Kalai Va Nee became an Art Festival. A festival where performers have the full liberty to express themselves, provided that’s not homophobic, casteist or sexist in any way.”

Bringing people to watch the show wasn’t easy for him. “At the start of the pandemic, people were in an ‘art-drought’ of sorts. There were no live shows, and the scope for entertainment was less. So when the shows started taking place on Zoom, there was an initial boom, and people came in huge numbers to watch comedy,” he says. However, it is the same now, as at some point people would want to get on with their routine life. “Now, that number has drastically reduced, and the effort put into selling tickets is more than writing jokes,” Gurumurthy added.

He could not have made this happen alone. He had help from his best friend from college – Nikila, who is a graphic designer. “She helps me with the creatives. Apart from her, I’m the only one who manages everything. Right from ticketing to production to content writing to promotion to hosting to curation to photography(screenshotting), I’ve been balancing it all somehow. I would also like to thank a few friends here, who’ve been my support system during both the Kalai Va Nee editions. Vikas Muralidharan, Vishal Muralidharan, Srimathi, Badri Janu, Haripriya, Deepika, Harish Aravind, Iswarya, and Sarah are few people who’ve been offering a lot of moral support.”

Amid all the dream that he has, Gurumurthy wants to take one step at a time. For now, he wants this festival to go smoothly, and that is the only thing he has in mind. It is not the finances that he is worried about. “All that matters now is to make art reach the public. For the next editions of Kalai Va Nee, I have something interesting but more ambitious in mind. Once the idea materializes, I’ll reveal it. It is too early to make a statement, but I’m hopeful of pulling it off,” he says.

“Be yourself and Believe in yourself”, says Santosh Kumar| An NGO worker

Take care of your resources, they will do their part: Mano Bharathi, God Particles

It’s never too late to dream- Entrepreneur Poornima opens up

“I got disturbing messages for choosing such a script”, says Lakshmi Pooja