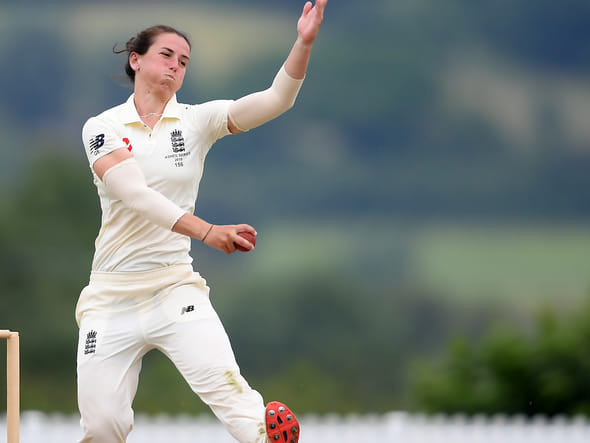 There are a few cricketers You’d end up keeping score because you fell in love with their batting and bowling style. For me, it is Elwiss. Now, She isn’t the “perfect” player who plays all the textbook shot with utmost perfection. She is someone who has a unique style, something you’d call elegant and beautiful.
She holds the bat up, swings a bit and waits till the ball gets to her. She moves either towards the right or goes to her back foot to play the shot. It is just plain pretty. I do wish to watch someone plays a similar way left-handed. I even used to mirror her videos and watch it. It’s beautiful.

I cannot get enough of her bowling action too. I don’t have reasons why I love it. On top of my mind is her delivery to Amy Satterthwaite during one of the ODIs. She runs and gets Satterthwaite leg before wicket. The ball swings in and it’s just a beautiful sight to watch. Unfortunately, not for me, because White Ferns is my favourite team. Talking more about that match, the White Ferns was strong while chasing a modest target with both Devine and Bates adding 60+ for the first wicket. Elwiss, the culprit, would bowl too well that she would remove Devine and Satterthwaite. Soon, the team would collapse and would lose the match. I remember getting all angry over Elwiss for the same. Unfortunately, she is just too good that you can only appreciate her. That is why this game is too hard.

The England team is too strong that she would be either sitting out or would be shadowed by other top performers. However, Elwiss is that bowler to turn to when you have to contain runs and go through your overs quickly. It is not easy to hit her for a lot of runs but you’d end up quietly picking up singles or would be glad to play her out because the length she bowls is inviting. You know it’s a trap and you cannot fall for that.
Injuries did play a role in keeping her away from the game. However, she always tried to be there for the team be it ball or bat.
*
She began her cricket at her home in Wolverhampton by bowling to her brother at the age of seven. She then went on play with and against boys and she became the captain of her county’s U13 women’s team then there is no looking back at all.

She practised hard to finally make to the 1st eleven of her county where she had an opportunity to play alongside her idol Lucy Pearson. She then began to make heads turn and slowly she knocked the doors of Sussex and England selectors.
Soon she opened the bowling for Sussex then she was picked up by England.
Making into the T20 team, lesser did she knew that she would play the ODIs as well. She was picked as the replacement of her good friend Jenny Gunn.
She was super impressive that she went on to play for Melbourne Stars.

*
In 2017, when Ellyse Perry scored an excellent double hundred in the Ashes, it was her unbeaten 41 off 190 deliveries along with Knight’s 79* off 220 deliveries that helped England to draw the Test. Possibly her best innings. The grit and determination she showed that day were brilliant.
Another match I remember vividly is her unbeaten 30+ against India in 2019. Indian bowlers did well to pick early wickets while defending a total just above 200. However, Knight and Wyatt pulled the team back. Once again India fought back but Elwiss took her time, played a sensible knock to take the team home.
*
Elwiss still have a lot more years to go and I’m sure she will help England to pick up another World Cup soon.