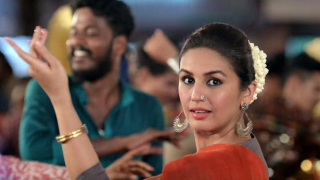 We live in a world where Heroine in most of the movies is just used for songs. Yes, there are a few countable movies which carry a role for the heroine, and there is Huma Qureshi who is a wonder.

Starting her career as a model, first starred in a movie named Junction which was shelved. Huma Qureshi’s Samsung advertisement impressed Anurag Kashyap, and he signed a three movie deal with her.
Then years later, she was the initial choice for Ajith’s Billa 2. That would have been her debut movie, but she missed out. Everything happens for a reason they say. Had Huma Qureshi acted in Billa 2, she might have missed her dream debut as she says. There she entered the Hindi cinema with Gangs of Wasseypur. Qureshi, with an unusual attractiveness and a brilliant screen presence, stood out of all the actors and made a name for herself. Anurag, as promised gave her a chance and this time as a lead in a movie called Luv Shuv Tey Chicken Khurana. I watched this movie because there was this song “Kikli Kalerdi” got stuck inside my head right from the first time I heard. With Kunal Kapoor, Huma Qureshi as the lead, it wasn’t exactly my cup of tea, but yes, I did like it. Once again, she stole the show for me.

Being a fan of Kalki Koechlin and her movies, I watched Ek Thi Daayan as well where Huma Qureshi acted as the witch. Her confident screen presence and the way she stood out was phenomenal. The movie had only a few good moments and Qureshi made full use of it. All the three actresses in the movie- Konkana Sen Sharma, Kalki Koechlin, Huma Qureshi are all more of performers. Qureshi did grab all the attention.

2013- It was just her third year in the industry, and she probably became the quickest actress to actually have the freedom of choosing her role in a multi-star movie. Before Qureshi, I have only heard about Deepika Padukone and how she ‘selects’ her roles. D-Day saw her play the role of explosive expert. Once again, her role was appreciated. Badlapur, Jolly LLB 2 were the other two movies where I couldn’t stop admiring her.

Kaala has given her loads of fans than most of her movies did. She was too good. Too good that I couldn’t take my eyes off her. She was given one of the powerful roles, and she carried it well throughout.

I loved the way how Qureshi’s eyes speak in every single role she plays. She has this unusual attractiveness which I cannot stop admiring.

She is proving time to time that she is more than just a “pretty face”. She is an artist, and she is here to stay.