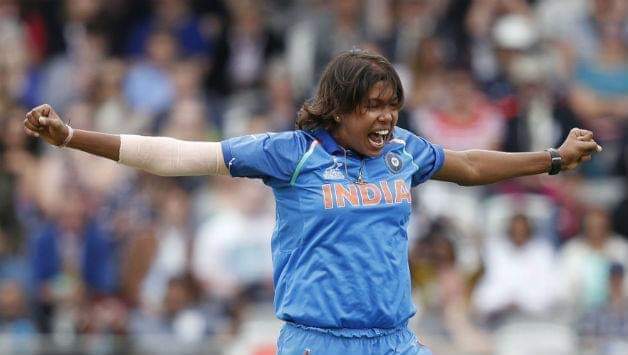 Australia battled New Zealand to become the world champions before a shockingly huge crowd, almost triple the amount that returned to watch 2016 WT20 final. The tournament saw many records which are yet to be broken till now. That Australian team did inspire many young kids to pick up the sport seriously- To talk about one, in particular, the uber cool Fitzpatrick rocking the stage every time she had the spotlight. Every time she came ran into bowl, it was like an artistic bullet. The bullet that went through the defence of the batter. If that was excellent to watch, the final victory lap from Belinda Clark was a delightful sight as well. While it inspired many, It did hit young Jhulan hard who was watching her from the stadium and inspired to practice the game seriously.

Hailing from a small district that didn’t facilities for cricket, Jhulan had to travel some 60kms in the local train for her practice. She made into domestic team soon. After piling up records in the domestic cricket, she made her international debut in 2002, at the age of 19, the time where the women’s cricket was relatively unknown to us, the fans.

After the retirement of Fitzpatrick, She became the fastest as well as the consistent bowler and went on to overtake her idol, became the first woman to cross 200 ODI wickets. Her ability to swing the ball while keeping up the pace and accuracy, Jhulan did make it to the headlines many times. One such occasion where India grabbed the Test series, a format that is largely unpopular in Women’s cricket against England at their home for the first time in 2006. She grabbed 10 wickets in that match, five wickets haul in both the innings and the best part was she bowled 36-odd overs in the second innings. Imagine how fit she was and some ten years later, she maintains almost the same speed.

Jhulan has always been a team player someone who always encouraged, motivated the youngsters. She keeps cheering up and stays alert every single delivery. You probably can hear her shout “c’mon” from the boundary line. Such is her involvement with the game.

When the going gets tougher, Jhulan comes up with unexpected stuff that can change the course and result of the game. She is a match-winner. You might have seen her do exactly the same in the match against Australia in the World Cup in 2017, where she came up with an unplayable delivery to remove Meg Lanning. There are lots and lots of similar deliveries in her career.

She, along with Mithali Raj did change the phase of the Indian cricket and both the players have seen so much right from empty stands to sudden limelight everything. If people are starting to support a bit extra for the women cricket it is definitely because of Mithali and Jhulan. Yes, there are a lot of youngsters who can replace her right now, but nobody can even come near to the legacy and the standard she has created for herself.

Happy Birthday, Jhulan. You are our God. ❤️