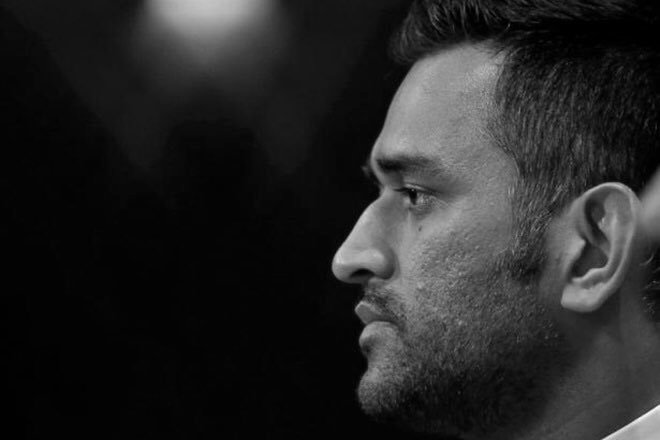 Two fours in two balls. That was all the young lad from Jharkhand needed to impress the selectors in 2004. He was tall, built, with kinky hair that would dance whenever he walks. His six-hitting capability was an asset for the team.

***
After sluggish performances, Ganguly’s instinct to promote Dhoni up the order worked out big time, and he scored 148 against the arch-rivals Pakistan, won the man of the match award.

Days later, he was interviewed by a few, and he was asked how he felt about all the attention he got recently.

Dhoni replied, ‘The cameras used to pass by me; now they’re stopping for me’. Lesser did the man know what was about to follow in years.

Come 2007, the year when India’s 50-over journey ended even before it started. Every single Indian was totally disappointed and was bashing the team.

Then came the 2007 T20 World Cup. The disappointed Indian fans had a lot to cherish, not only because of winning the final but also because they had a new leader. A leader, who is young, a think tank, a leader whose journey to become the legend has just begun. The birth of Dhoni, the batter and Dhoni, the captain, both came against the arch-rivals Pakistan.

When you think of Dhoni, you think of the above-mentioned events. It is all special, these are all forever kind of memories. To put it simply, Dhoni is a household name, and these memories are common for us all, including the God Sachin Tendulkar himself.
****

Most of the cricketers we see come from a lesser-known background and were self-made, but what makes Dhoni differ from them is that most of the legends now found their mentor at the right age who made them the player they were but for Dhoni, the influence, the mentoring, the class everything came from the Television. What closely. Literally, none of the shots from Dhoni is from the old textbooks, but he created a book for himself.
***

The young Dhoni was almost the same as Viru. What Viru did at the start, Dhoni did it at the end of the innings. They both dealt with the same bowlers at a different time of the match but both the players had the same attitude.

With years, Dhoni changed. With responsibilities, Dhoni changed. He realised himself after becoming the captain of the Indian team. He didn’t become Sehwag. He didn’t become Sangakkarra or Gilchrist. He was just another lower-order batter before the captaincy, but after he became the captain, things changed, he became more determined. The young boy in him grew up but never went away. He kept that love for helicopters alive.

That was Dhoni the batter. Dhoni the captain started to become a legend when he won the World Cup. He nearly lost it to Misbah-ul-Haq but now forgotten Joginder Sharma, Sreesanth played the perfect side roles to Dhoni, the hero. When the whole team was celebrating, he silently let all the feelings go away, went on to remove the stumps as if he was changing the ends during the end of the over. He was calm.

Fast forward to 2011. The same Dhoni, without the long hair, led the Indian team that got the better of India’s other neighbour Sri Lanka. He silently moves away to let Sachin Tendulkar and Virat Kohli enjoy the moment. When asked about how he felt, he said “we” won it for each other. He mentioned that the “team” batted well.

Team before the player. Country before the team. This has always been his priority.

The interim years between two World Cup wins were like India standing there tall at the ring, waiting for the opponents to knock them off. Dhoni had hit the purple patch, and the victories came running towards him. His Midas touch helped us to reach number one in the Rankings as well. Sometimes, it was the team that fought hard for the win, sometimes, it was him, only him.
***

The most important factor of Dhoni is the thing that he believes in his men. He backs them well. He gives them opportunities, allows them to play more. If not for his decision, we would have missed Rohit Sharma, the opener. Probably, he knows the value of backing up someone and bringing the best out of them. If not for Ganguly instincts, he wouldn’t be here as well.

If there is a word to describe Dhoni, I would pick the word Original because that is how he has always been. With his batting, his captaincy and his keeping call it whatever you want.

With only a few matches left in him, Dhoni might retire any day. He would simply think, decides and call it off. He might not play a farewell match. He might call it a day through a tweet and log the Twitter off for days and would go on a vacation with the family at some unknown place where no one can track him. When he does that, we are going to miss him forever. Till then, let us make sure to enjoy every single appearance of his because he is a legend and will always be one of the greats ever to play the game.