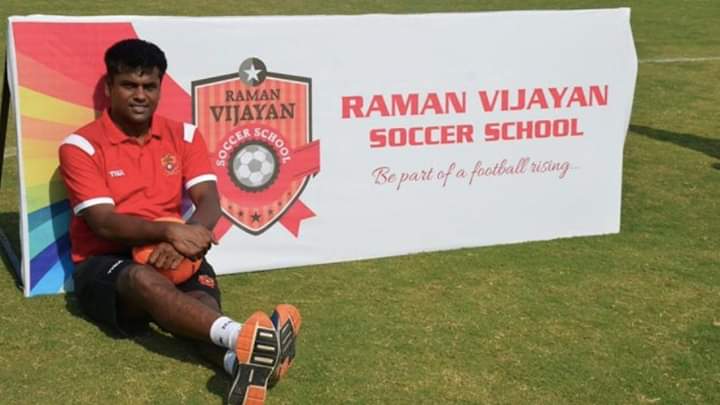 Picking up Football in a cricket worshipping country takes a lot of courage. For Raman Vijayan though, a natural talent, he loved challenges. That being said, he was shy and an introvert. A shy man loving challenges? Oh yes, he is a rare blend.

1993-ish it was. He was an Indian Bank employee. Studies. Job in one of the biggest banks. Something a normal shy introvert would be glad to have. With years, Raman dreamt. After playing for FC Kerala-where he top-scored with ten goals in 1997-1998 season, he wanted to move to Kolkata.

Now, on papers, look at the dream and the life he was leading. He wanted to be a footballer. Again, it is a cricket worshipping country. To leave the job to follow football and to put the life at the “corridor of uncertainty”, you got to something different. Well, he was. Again, as a striker, he loved challenges.

He took a wild decision to go to Kolkata leaving everything behind just for the love of football. Thanks to his ravishingly beautiful goal-scoring skills, he made a mark in Kolkata to become the ‘Bijoyan’. The experience and encounters at East Bengal FC made him the guy he is today. The shy introvert was long gone and this new man, a professional, had dreams and knew how to make it a reality.

He was the part of the Indian team and he made heads turn out there too. When you thought he had nothing left in him, he came back to represent play for his club when he was over 38. Even when he wasn’t as half-fit as the youngsters out there, he had something they didn’t have, the ton loads of experience and as expected, he came out there and scored in his very first outing. He was still a star.

In the interim, when he hung his boots and returned to Chennai, his aim was to produce more footballers from the city. With AFC coaching licence, he decided to launch an academy. He used all his savings to begin his academy in a remote place of Karaikudi in order to unearth talents and give them the proper exposure of the game. It was rightly called as the Noble Football Academy. Soon players like Mayakkannan, Sivasakthi and Pandiyan were born.

He also began another academy in his name. Raman Vijayan Soccer School trained the talents from Noble Football Academy and recently, Sivasakhi, Kamalesh made it to the Bengaluru FC reserves after doing great in both Reliance Foundation Youth Sports and AIFF Elite League.

Soon, he will be starting women’s football academy which will be running parallel to his Nobel Football Academy.

Some footballers cannot stay away from the game and Raman still continues to coach teams and is taking youngsters under his wings, to teach them to fly, to dream.

Had he born in a different, football-loving country, he would have been celebrated for what he has achieved. Unfortunately, it is still difficult for most of us, including myself, to look beyond #cricket.