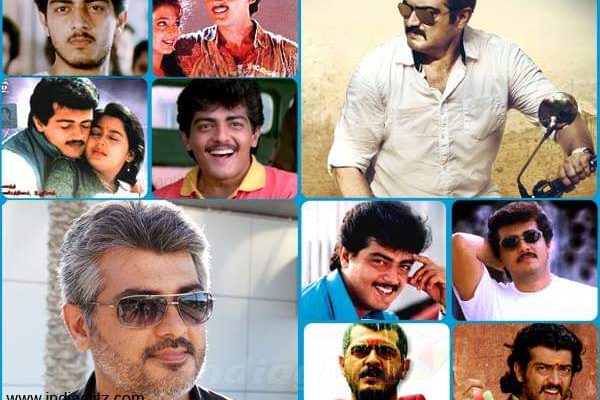 Before Maddy could take over the chocolate boy tag, there was Ajith. Probably, the most charming actor one would have come across during the ’90s phase. Vairamuthu rightly penned the lyrics about him in the movie Kadhal Mannan. Yes, He was like a dream.

When one thought they could tag him as the chocolate boy and nothing more, thanks to SJ. Suryah for giving us Vaali. At that point, nobody was expecting him to perform so well to differentiate between two roles. Yes, He made us all emotional.

Then followed movies like Amarkalam and yet again he surprised us. There started the rise of the normal actor to the ultimate star Ajith. His peak was when movies like Mugavari and Kandukondaein Kandukondaein released.
Peak because- most of the youngsters saw ourselves there. Watch it for like 1000 times, still, most of us can see a glimpse of us in the movie. It was relatable.

When people were eager to know what’s next, he did movies like Citizen- one of his best performances yet underrated.
A soothing family entertainer- Poovellam Un Vaasam. I shall include Deena as well.

Unfortunate that he had to go through surgeries. When we thought we could write him off, he came back to do a movie like Varalaaru. Believe me, To perform Bharathanatiyam after spine surgery is not as easy as you think. Of course, no words to explain his efforts. After that, a few Box office bombs (compared to his caliber) followed, though we liked a few movies, it wasn’t a great hit at least not of his caliber.

He kept trying and finally, the man who charmed us all those days, was back to give us a kickass performance in Billa. Mixed with grace and style, he once again made us all drool.

Then came his one of the biggest blockbusters Mankatha. Nobody would have carried the salt and pepper look this well. The movie that had it all, a complete treat for his fans. I had to wait till Yennai Arinthal, and that was the last Ajith’s movie I liked until Viswasam.

As much as I loved to watch his movies in theatres, in the recent times, he made me rethink before going to his movies. His last few movies were almost similar, and I cannot even say which is what though I watched it all. I liked Viswasam though.

All these years, what Ajith has done is gaining fans who loves, accepts, backs him no matter what. No matter how he looks, no matter what movie he does. It’s all about gaining ardent fans, right?

Ajith wasn’t someone who had passion only for acting, but when he came into this line, he knew if he had to survive he needs to work hard and gave it all. His hard work and persistence took him a long way in his career to transform him from normal star to Thala. The transition was not easy at least not for his body that saw many life-threatening injuries.

I love the way how he maintains his personal life. I do admire how he keeps himself busy and keep learning new things whole-heartedly.

He never gave a damn about what people think of him; knows how to enjoy life. Be it racing or photography.

To end this, I prefer to watch Ajith in a movie like Kireedam than most of his recent works. I badly wait for Nerkonda Parvai now.