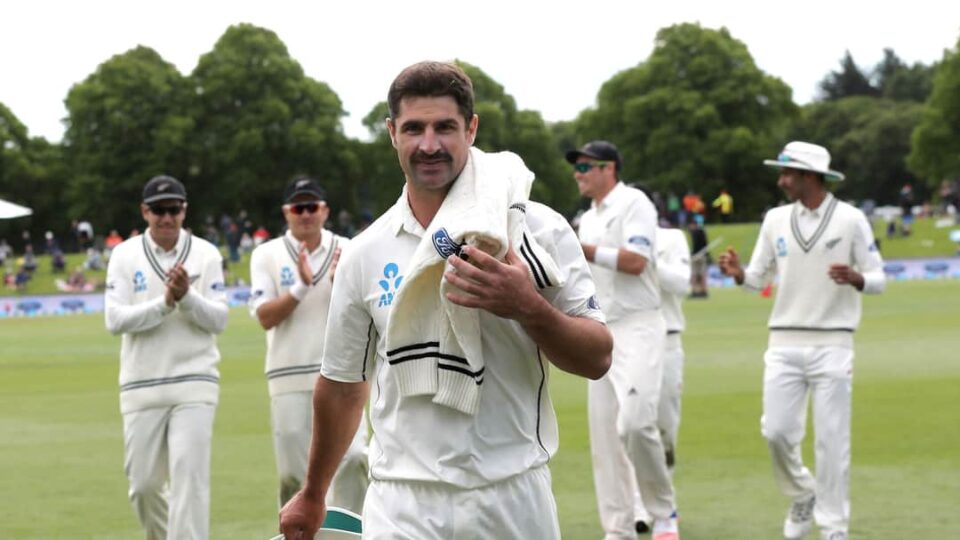 Colin de Grandhomme is a miracle worker. Miracles don’t happen every day, do they?

He is not the brick to your building but he is the paint you use. He is like the coat you wear on a good day. He makes you look pretty. Sometimes, they play the main role.
He loves to bowl, he loves to bat, he loves to field and is a man of a few words. If it is his day, you see those few runs making an impact. If not, you see him giving away a few extra runs that turn the match upside down. Either way, he makes the game looks pretty. Grandhomme can make you cry and would make you laugh in moments. He is that guy you don’t want to be friends with and you know you are making a mistake most of the days but you end up standing up for him and it happens without any guilt or regret.

*
You see Trent Boult and Tim Southee or Trent Boult and Lockie Ferguson streaming in. It gets difficult to spot the ball. It is quick. It is dangerous. You do have a second thought of running away instead of facing those fiery yorkers. Ask Faf du Plessis. He would tell you what it was like to face Ferguson. After a few overs, you see Grandhomme. He takes long strides, goes to the bowling position and comes back slow to deliver. It is super slow that you could finish a run in between. He then comes up with a delivery that is super slow. Sometimes, scrabble seam or the new love knuckleball. Either way, he makes you wait for a long time.
Now, when the ball leaves his hand, somedays they come right at you, somedays it swings. Oh, when it swings, things get tougher. Graciously he would end up bowling those inswingers, somedays, the extra height would do the magic. If the pitch is holding up, Grandhomme looks even more threatening. Now, this is for the second-longest form of the game.

When you are playing the shortest format, you tend to hit whatever comes at you and Grandhomme is a treat by then. Yes, there are days where he keeps everything quiet but most of the days it goes the other way.

If he is as smooth and quiet as his words while bowling, he is completely the opposite when it comes to batting. He can smash literally every single ball, in every single angle possible given that it is his day. He brutally gets down on a knee and can sweep for a six and somedays, he would gently push the ball. Either way, the result is the same and you would wonder what is wrong with the guy. Again, he could prove you wrong if you bet on him. Maybe, he doesn’t like that. He wants to be left alone.

As captain Kane pointed out, he certainly is the X factor of the team. If he gets going, the Blackcaps would win from nowhere and he can pull down the curtain for them too. It is really hard to understand what goes into the mind of Grandhomme during crunch contests. You simply cannot predict. Now, that’s the thrill and entertainment he brings to the game. Even if he doesn’t perform regularly, the fear he provides to the opponent remains the same. Nobody can write him off despite his performances. Of course, he is not all worse. There are times where his 20-30 runs would be the difference in the match.

He doesn’t like to be dominated, especially while batting. He goes berserk and guys like him take the pressure of the other guys and players like Taylor and captain Kane deserves it. Batting with him means, captain Kane or Taylor can play a few dots and take their time before getting to the other end without worrying about the asking rate.

There are times where he stood out for the team with the bat. On a dead pitch, he would go smash a quick thirty. On a two-paced pitch, where everyone would struggle, he would easily bat through, still, finish with a fifty and a strike-rate above 100. Come Test match, he would love to play those lofted shot and make the bowlers wonder about the format. Oh, you can make him bowl any number of overs you want. He loves to be involved in the game and Test cricket gives him that pleasure, of course, more.

The Blackcaps is not short of all-rounders. They have plenty of them and plenty coming up. But what makes Grandhomme special is the simply how he brutally takes on the bowlers and for those hooping inswingers that really makes a difference on the given day.