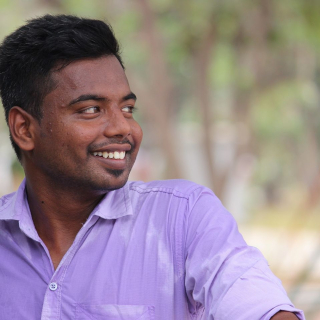 He and his team are known for memes. His memes might be 18+ but it never offends people. Purely entertainment-based meme creator is Anjali Raga Jammy. I had a phone conversation with him to get to know about him as his memes are so viral. Thank you for all the fun-filled talk and it was not the first time we were talking.

He is a process lead in an IT company and lives in Coimbatore now but he is a meme creator since 2014. When I asked about his thought process and the idea of creating memes, he was all praising his team. This shows the bonding between him and his team.

If you all know about Black Sheep Youtube Channel, they once conducted an awareness program regarding anti-piracy, It was a marathon and happened continuously for 24 hours and RJ VigneshKanth asked Jammy to create memes for that event. Jammy and his team created 600 memes against piracy.

Also, he was one of the speakers in Neeya Naana -Vijay TV where the topic was “Meme creators Vs Bloggers”.

His team was also a part of Meme Marathon. Site Media Team conducted the show and his team of 10 launched 60 memes in 3-4 hours.
Even they have developed 200 memes trolling the marathon. They have this mantra “If we create a negative impact about something it might reach more”.

Total memes created by all the meme creators on that marathon was 21679.

He also raised his opposition against “Banning Jallikattu” through his memes.

He has been a part of many motivational classes and he expresses his emotions through memes.

A student from a medical college asked him to make 100 memes and a video meme for his college culturals and he did.

Many people would have thought that its kind of abusive but he was so sure that his memes are not going to hurt anyone and a friend of his asked as he was not creating memes for a while.

“I wanted to make people aware and I used memes to convey”.

So here is the conversation with him,

See. it’s quite simple. Everyone has a perverted mind but, I thought I can make this in a comical, funny and educational way. This is not intended to hurt anyone.

2. Have you ever been judged by your friends and family for creating 18 + memes? Few girls may take it in a wrong way, have you come across it so far?

Literally, so many people thought that I am a sadist and perverted, but I really didn’t want to explain myself. Most of the people thought that I am perverted in real life too. Friends have ignored me and are ignoring me even now. My family doesn’t know that I am creating memes but they have a lot of trust in me. They trust that I won’t bring a bad name.
And lots of girls said that they feel scared when I like their posts or ping them. So people will judge you by your posts alone and I know that, but some girls will never care about what I am posting.
I gained both positive and negative feedback. Positive is, “Hey your posts are awesome and different and I am following it regularly.”

Also, people say, “Hey, why are you posting 18+ memes? I am going to block you”.
Few don’t inform that they are going to block me. I just ignore them.

3. Meme creators have to be active on Facebook to get the reach they need, how were your parents view on this?

My parents are my support system. I used to create memes in my leisure time. But when I was unemployed, it became my daily routine. Parents thought I am doing this uselessly and asked if I could do something for a lie. But once I got featured in Neeya Naana -Vijay TV, my mom got emotional and said I am doing this to groom my career and wished me best.

4.What was your thought about meme creating when you started and what about your current view about it?

In Nov 2014, I started to do memes. When I started, I thought I will not survive at least let me make people smile as long as possible. I am the type of guy who likes comedies and songs more. I use to make fun of these songs, I started using my uncle’s phone and I seriously write notes for time being and then when I get the time and template I create the memes. When I started, there weren’t many meme creators, hardly 60 people. So I survived easily, but now, it is really tough as everyone has become a meme creator. If you handle anything properly, you can change it into a job. This is what I believe. I had a few rules, memes should not be vulgar, should not promote abusive content. It should be fun. That was all I thought about. My love towards Goundamani, Senthil and Vadivel made me a meme creator.

Patience is highly important in meme creation. In 2014, everybody uses the same template, after 2015 new templates were created and there were many template donors. While I was creating, I used to search the video on youtube, take a screenshot and collage it in picsart , select a proper font and then drop it in meme generator, crop it and then the baby(MEME) is formed.
Meme creation is getting down already. Many have stopped doing it.

5. We all know that memes are intended to make fun, but many memes are offensive and I hope you agree with that. What’s your view about those memes and their creators?

I totally agree with you. We can’t judge people easily and people are using it as a weapon to show their anger and abuse people by using it. Even I have experienced it. But they all just want likes and fame. But they are hurting others to get the limelight which is quite disturbing to me. My idea about this is, we just have to ignore them.

6. So many people are creating memes nowadays, so how to take this further as a real profession?

Yes, right from engineering students to everyone have started to do memes. We need not make it as a profession. Nowadays, digital marketing is in high strides and meme creation will help because it involves creativity. There is also a big future in marketing and people can achieve more.

7. What do you want to say to people who are considering meme creations as filthy?

People may think of it as filthy and do with no use, but I know that I am using some part of my brain. I get a kind of satisfa

ction when I create a proper meme and the likes I get keeps me high. That’s real bodhai. Everybody is working for happiness, isn’t it? For example, a man works till 6, takes a bus in haste, somehow he gets a seat in that crowded bus and once he unlocks his mobile, if he gets to see news only about crime or murder, won’t he feel exhausted? If the same person sees few memes with Vadivelu’s template he would be happy. Only a meme creator can provide that. People who say filthy cannot realize it.

Lastly, I would like to add that the people I know are not creating abusing memes and I am proud to be a meme creator.
Such motivational talks made him do more and his fans will definitely shoot high after this blog.
His creations are many and his positive thoughts are keeping him to go forward and forward.

We need at least 3 months to recoup: Gold medallist Arathi Arun on getting back to gym

It talks about the hope of uniting two entities: Ganesh talks about his next album ‘Avalum Avanum’

In conversation with Kapil Talwalkar of Zoey’s Extraordinary Playlist