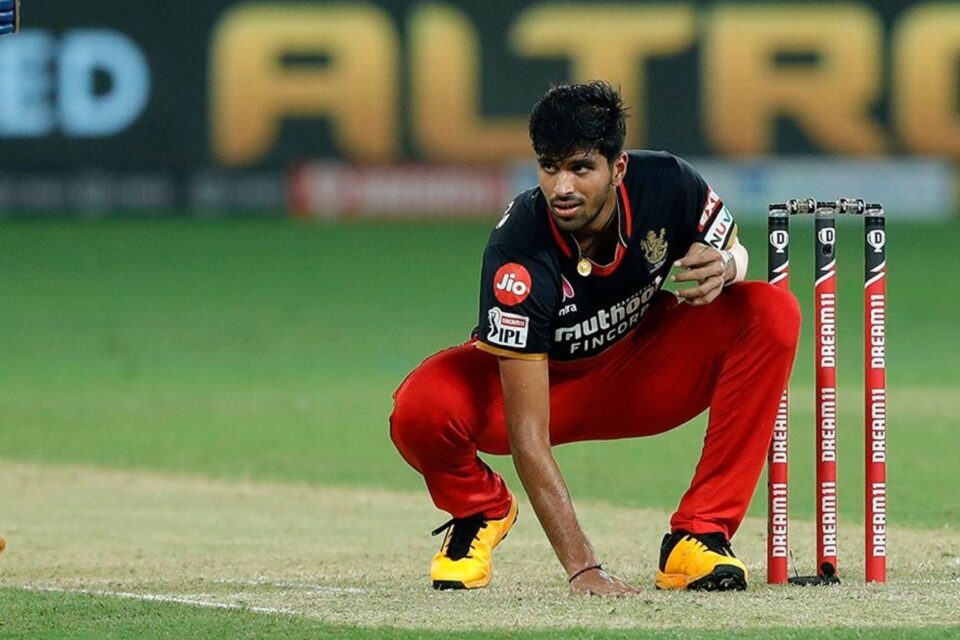 Over the wicket, says Washington Sundar marks his landing, goes back and starts his first over. Mumbai is in good touch, they have scored a few off Udana. Washington Sundar has works to do here now. It is a gamble to open the bowling with him, and it can go either way.

We have seen millions of runs scored in this IPL so far. The ground dimensions are small, the ball is coming to the bat nicely, and the power hitters are taking on each and every bowler. A mis-hit is going for a six, and a well-timed shot is taking the delivery outside the stadium. Bowlers are making it easier for them to strike too. Only a few are at least keeping it simple.

Now, coming back to Washington Sundar, He begins with a couple of good length deliveries, robbing them for dots and left Rohit Sharma cramped. Another dot and the pressure was mounting. They were chasing 200+, and the run-rate pressure was always there.

Rohit Sharma gets ready this time. He expects a good length delivery, but the ball isn’t at the place where he expected. It is straight at the stumps, middle and off. Rohit connects it. He did a decent job there, but it wasn’t enough to take the ball past Negi. With some neat old-fashioned technique, he grabs it. Mission Accomplished.

This confidence makes him bring a slip for De Kock who defends it. The next delivery goes between the cover and extra cover for two runs. Over. In a high octane run chase, against a quality batting side, he bowled an over that went for just two runs and took the wicket of Rohit.

Now, he wasn’t trying it too hard. It was simple, straight at the stumps, mostly pitching it at the middle, beautiful pace variation mixed with a bit of Johan Botha-ish style of stealing the room from the batters.

He almost got de Kock twice, once when a good length delivery nibbed back in, the second was when de Kock almost lost it in search of the room.

A few overs later, he came back. Hardik Pandya and Ishan Kishan were the batters. They were on the pressure after losing de Kock and Yadav. An absolute good time to steal a few dots. He did. He made two of the big hitters to play defence, check shots and allowed them to score singles. In a way, they decided to play him off too. They weren’t trying much, thanks to the precise field placement.
He bowled according to the plan, to his field. In a game where even some of the marquee players were taken for plenty, Sundar calmly got through his four overs giving away just twelve runs.
Now, he has been bowling in the powerplays for a long time. As a 10-year-old. As a 14-year-old. It was the then NCA bowling coach D Vasu’s idea. He moulded him along with a few other veterans in the field. Sundar, as a 10-year-old would bowl the death overs and would return with good figures. When he was almost 14, he would open the bowling and would attack the batter with slips and everything. Then there were different challenging scenarios which Sundar won.

In the IPL, It was Stephen Fleming’s idea when he was with the Supergiants. The Supergiants took on Sunrisers that day. Fleming came up with the idea since the team had lefties at the top-order. The team asked whether he was comfortable doing it. Sundar liked challenges, and his fearlessness got him to nod. He was confident and did well that day. The team went on to defend one of the lowest totals in IPL.

Things began to change for him right after that match. He fared well in the IPL, achieved big things in the domestic seasons and was breaking the doors of selectors. He got his call-up a few months later, but before that, it wasn’t easy.

In that same year, he failed to make a cut in the squad for the Syed Mushtaq Ali trophy. A month full of training where he never came out of the nets helped him not only to make a come back to the squad for other tournaments, but he also did well, helping TN to win trophies. Everything began there. He was spotted by Kanitkar who was with Supergiants at that time. Sundar was roped in as the replacement for Ashwin in the team.

Smith was one of the seniors to take him under his wing and helped him to fly. He really did. He was one of the economical bowlers and almost got the bus to Australia. And then it happened. Sundar failed the Yo-Yo Test. The worst part was he knew the result by seeing the newspaper. You do know how media works, right?

It was shocking but understandable considering he had hamstring issues. What followed was a month of pain and redemption. He got back and this time, caught the bus for the Indian team to Sri Lanka. Then he soon became one of the go-to options in the shortest format of the game.
What stands out with Sundar is the fact that he is all about clarity, fearlessness and simplicity. He bowls normal line but is very clear of his plan. He varies it according to the batter and easily bounces back even after being hit for multiple sixes. He rarely has an off-day.

He plays with a straight bat and hits it over the bowler with ease. Of course, years of practices went into those shot. His father, the Sundar senior, who was a Ranji Probable, used to take the Junior to the ground when he was almost six. Right after his sessions, he would turn to bowl to his son. Tennis balls and underarm. Soon, he began to play the proper game, with gloves, pads and everything. A home-run academy means he was never short of practice time.

Sundar Senior made him learn everything. Batting, Off-spin, Leg-spin, Wicket-keeping, medium pace. You name it. He even used to play a different role in different clubs. Sundar was 12 years old when his father was convinced that he could make a career with cricket. He did extremely well in local division league against people who were almost thrice his age at that time.

Since then, studies took a back step, and the path was clear. He always knew what he wanted to do. Four years later, when he was 16, he made to the under-19 World Cup team that lost the final to West Indies. Though the team lost, there were a few players who made heads turn and got into the domestic sides. For Sundar, he is currently having a good run. With the amount of maturity he shows on the field, it is astonishing to think that he is just 20, and has more than 15 years of career in front of him. If he can keep up at this level, he sure going to be a (regular) asset for the Indian team.

IPL 2020, RCB vs MI- RCB defeats MI in a thrilling super over