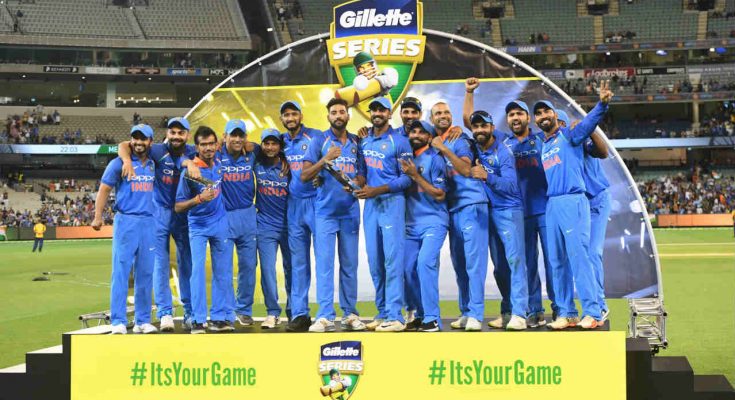 The rain hit match saw a few changes made by the captain of both the teams. For India, Vijay Shankar became yet another debutant in the series and Ambati Rayudu paved the way for Kedhar Jadhav, Mohammed Siraj was replaced by Y Chahal.

It was a good toss to win for the visitors considering the conditions. Kohli asked the hosts to bat first.

Once again the promotion of Alex Carey up the order failed for Australia as he fell to Bhuvneshwar Kumar in the third over of the match. The captain Finch followed him, became prey for Bhuvneshwar Kumar once again. The initial breakthroughs helped India to steal quick overs in the form of Vijay Shankar and Kedhar Jadhav.

Vijay Shankar, though couldn’t grab a wicket, played a vital role in keeping the in-form Shaun Marsh quiet by not offering him the width. Kohli introduced Chahal late but the latter didn’t take much time in clearing up the batting order of the hosts.

He removed six players with a bit of turn and the pace variation. Peter Handscomb was the lone warrior for the team, scoring 58. Australia ended with a modest score of 230.

The wet outfield and the weather cast made the target look like 280 and to prove that, both the Indian openers had a slow start. Rohit Sharma, the centurion from the first innings managed only nine this time, Shikhar Dhawan’s failure to convert the start continued as he was caught and bowled by Stoinis that led the MS Dhoni to join hands with Virat Kohli. Both the players took their time, converted one’s to two’s stayed put on a good partnership. Unfortunately, Kohli missed out on yet another fifty by just six runs. Playing his first match in the tournament, Kedhar Jadhav started his innings slow, along with Dhoni and as the run rate

kept climbing, he shifted the gears to produce a match-winning knock of unbeaten 61 along with MS Dhoni’s 87.

This is the third time Dhoni has smashed three consecutive fifty in an ODI series. He was also the man of the series this time while Chahal was the man of the match for his six wickets.