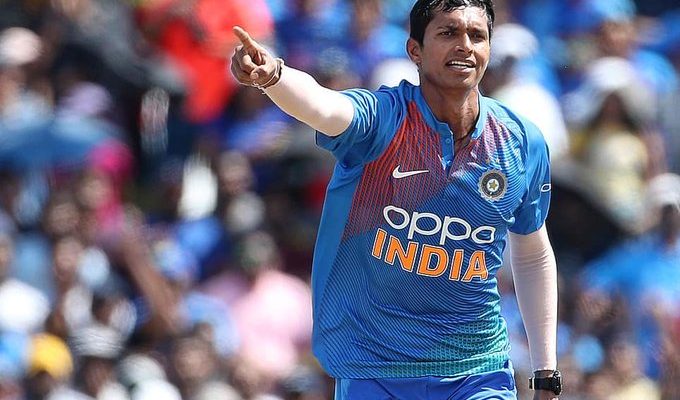 India played their first match after the World Cup exit, and they start the season with a winning note. Though India would have wanted to finish the match earlier, the conditions were playing its part as well.

After opting to bowl first, the Indian bowling and the fielding were top-notch once again, and West Indies players did not analyse the conditions at all. Other than Pollard, nobody looked to play out deliveries but were trying to attack. The ball didn’t come to the bat as expected, blame the dampness. The players were beaten for the pace, and they lost their wicket. Pollard did well to stay there and picked his deliveries to attack.

Coming to the bowling part, Washington Sundar started off well with the wicket in his first over, and he did well overall. So was the others but the pick of the bowlers is undoubtedly the debutant Navdeep Saini who also bagged the player of the match award.

Scoring only 96, West Indies needed early wickets, and they did keep it tight by picking them. After Dhawan’s wicket, Kohli and Rohit added a few runs. After Rohit’s departure, India lost Pant as well, thanks to Narine. Then Pandey and Kohli tried to finish it off, but once again the pace did the trick as both the batters were tempted to play a big shot which wasn’t there. So was Krunal Pandya. In the end, it was Jadeja and Sundar who took the team home.