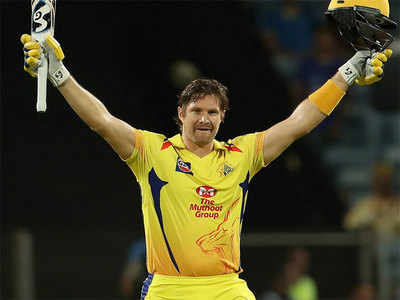 It is CSK all the way or I must say it is Watson all the way. What a knock from the big man Watson at the right time. He wasn’t timing the ball well at first because Bhuvneshwar Kumar was too good right at the start. He kept both the players quiet. Even Sandeep Sharma was doing an excellent job at the other end.

For an experienced player like Watson, all he needs is that one delivery on his slot to get back to the form. Sandeep Sharma gave Watson what he needed. From there on no look back. The pressure was back on Hyderabad once Watson started to unleash himself. Also, Watson had no choices at all as he was injured. Williamson ran out of options and he knew the match went out of the hands after the 27 runs over.

Once again, it was Williamson who brought Hyderabad back to the game with the bat after losing Goswami early. Yusuf Pathan, as always smacked whatever came on his way. It is always special to witness something like that from Pathan after all these years.

Lungi Ngidi’s spell in the death overs did change the momentum of the game. If not for his spell, SRH would have added at least 20 more runs to the total.

On the whole, it is an absolute one-sided contest which is won by Chennai Super Kings. This is their third trophy in seven finals.

5 BENEFITS YOU GET IF YOU DON’T WEAR MAKEUP!