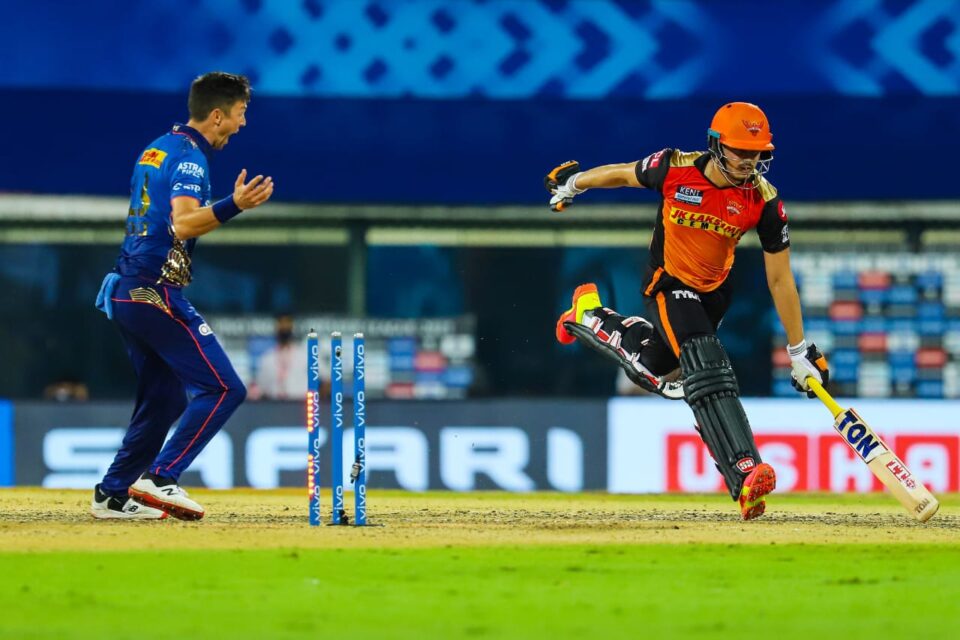 In yet another low-scoring thriller, Mumbai Indians overcame Sunrisers Hyderabad at Chennai on Saturday.

Mumbai Indians took a gamble to bat first at this venue and began well with Quinton de Kock and Rohit Sharma giving the team a good start. Rohit Sharma made 25-ball 32 in the 55-run partnership.

After Rohit’s dismissal, Quinton de Kock couldn’t connect the ball well as he would have expected, made 40. He didn’t have support from other end as both Suryakumar Yadav and Ishan Kishan got out early.

The major damage was done by Vijay Shankar who removed Rohit and Suryakumar Yadav.

Quinton de Kock and Ishan Kishan got out to Mujeeb ur Rahman who made his debut for SRH today.

In the end, Pollard’s 22-ball 35, which included back to back sixes in the final two deliveries, took MI to 150.

In return, Jonny Bairstow and David Warner went berserk. They seemed like they wanted to finish the match early. Most of the damage was done by Bairstow who was promoted up the order in the absence of Saha.

At one end, the run-rate kept ticking and the team had to take chances. During one of the attempts to take quick single, Hardik Pandya’s bullet-arm took the wicket of Samad.

After his wicket, Vijay Shankar, who was at the other end, tried his best but it was just too late. Vijay made 28 from 25 deliveries.

In the end, Boult ended the innings by removing the tail enders.

Mumbai Indians now have won two out of their three matches while Sunrisers Hyderabad are yet to open their account.

An open letter to Steve Smith

If MS Dhoni is fit, he should play: Wasim Jaffer