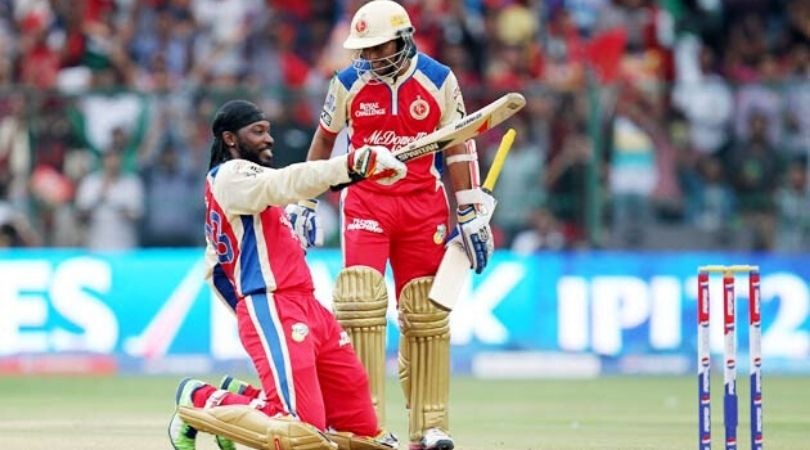 Chris Gayle has this unique ability to make the bowlers mere spectators. He can shatter dreams. He can kill careers. In 2013, Gayle did kill millions… of dreams.

Aaron Finch was confident to put RCB bat. Lesser did he know that it was an invitation for the front row seat for Gayle’s play. He accepted it and had the best seats. At some point, Finch was totally helpless and did sit back to enjoy what was on the stores. Some days are like that. You want to be a part of the record but You don’t really want to be there. As if you have another choice during the Gayle Storm.

Nothing really affected Gayle’s onslaught more than the 30-minute rain break. He just went on and on and every single delivery had the same result. Every single player was reduced to spectators and they watched the ball sail over the fence for most of the innings.

Gayle wasn’t all prepared for this knock. In fact, his previous knock was an unbeaten 49 off 44 balls during which he batted 17.5 overs. This probably made the bowlers of the Warriors bowl length deliveries and Gayle was glad to swing his bat.

He was middling every single delivery and at least three of the sixes would have landed on the roof or cleared it.

It all began in the 5th over where he took Marsh for plenty. Finch then brought Ali Murtaza. The poor leg-spinner who replaced Marsh for the 7th over had even worse. Gayle showed the elegance side to take on Murtaza. There were slog sweep, flat sixes.

Despite the slogs and power-hitting, Finch had no other go than putting himself into the shoes of the bowlers. He bowled the 8th over and gave away 4 sixes and a four. Soon, Dinda bowled a no-ball and helped out Gayle to smash a six in the free-hit to reach his 100 from 30 deliveries.

No, he did not stop there but took a moment to breathe. In the interim, we had Dilshan showing his skills but had to fall for 33. He was replaced by Kohli.

Dilshan’s dismissal supposed to slow Gayle. Well, it didn’t Murtaza was at the receiving end once again and this time Gayle had 20 runs. After Kohli’s 6, he had to walk back after he ran himself out. De Villiers walked in and was the only batter to participate in the Gayle show. He had 12-ball 31 before being dismissed by Marsh.

Gayle finished with an unbeaten 175 with 17 sixes and 13 fours. Though he took on everyone, he did give the respect a few bowlers deserved. One of them was Bhuvneshwar Kumar who ended up with an economy of 5.75. The other was Luke Wright who had 1/26.

Imagine a knock like this during the time of COVID19 where the fielders are forced to pick up the ball from the stadium in the absence of the crowd. I cannot imagine Finch or someone else climbing up regularly to pick up the ball. Funny scenes, of course.

Oh, in return, Gayle had 42 runs more than what the whole PWI team managed

Why Women cricket is not popular in India

“I will speak to Rahul”: Ganguly responds to Dravid calling off Bumrah’s test