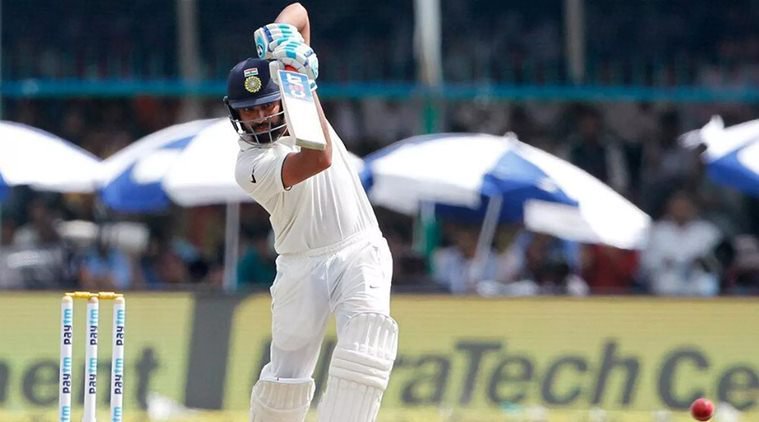 Rohit Sharma is all set to open in the first Test match against South Africa in the upcoming series. While former cricketers like Sourav Ganguly had suggested this option, it has received mixed reception among cricket fans.

Rohit has been in and out of the Test Team for a while now. Based on his excellent record as an opener in limited over cricket, the selectors have backed Rohit to do well as an opener in the longer format.

Rohit averages 39.62 in 27 Test matches over the past six years. For a major part of his Test career, he has batted in the middle order. His susceptibility to swing bowling is a well-known fact. And opening might not be a good place for him to bat in Tests. At least, his record says so.

When we take a look at Rohit’s performance in various batting positions, it gives us a clearer picture.

Rohit batted in most of his matches at number six. Interestingly, he averages 54.57 in 25 innings at number six. He has scored three centuries and six half-centuries in that position. Despite the fact that his home average is 96.12 and away average is 24.36 at number six, it throws light at where Rohit can be used best.

We made a comparison of the average number of balls faced by Rohit at different positions.

Rohit Sharma faces 68 balls on an average when he bats at number six, which is way higher than what he faces while batting at number three or four. His issues with the new ball is a well-established fact. That average of 45 deliveries at number 3 & 4 is boosted by two innings where he has faced more than 220 deliveries.

According to his record in the Tests so far, it is clear that Rohit is better off batting at five or six rather than the top order. One might also argue that Rohit hasn’t got a long run in a fixed batting position. As much as it is true, Rohit has never gone back to domestic cricket to prove his mettle in the longer format.

The last time Rohit played a Ranji trophy match for Mumbai was way back in November 2015. It has been four years since he played Ranji trophy. Yet, he is almost a regular in the Test squad, based on his performance in limited-over internationals in the past four years. It is absolutely not fair on the youngsters like Abhimanyu Easwaran, Priyank Panchal, who toil day in and day out in domestic cricket and scoring bulk of the runs for their respective teams.

The worst thing that might happen in this series is that Mayank Agarwal having a bad series and Shubman Gill replacing him in the third match. If there is anyone in Indian cricket circuit who deserves a long run at the international level, it is Mayank Agarwal. He scored runs everywhere he batted in the past two years to make a breakthrough in international cricket.

Will Rohit do well as an opener? We never know. Should he be backed for a longer run at the opening slot? Definitely not. Not at the age of 32. If he wants to become an opener, he should prove himself in the domestic cricket to justify his selection. We will have to wait and watch how he performs in the three-match series against South Africa.

Amidst all this chaos, I just hope that Mayank Agarwal doesn’t lose his place in the international team. Hopefully, he will not.